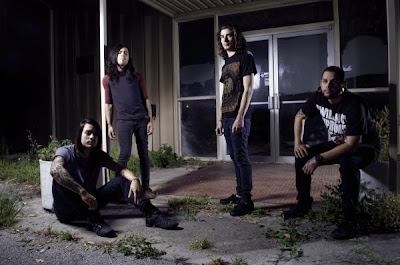 Where the band's name came from?
We had a different name before (a promise never broken) but after deciding to move to the states we all agreed to make a full change, and so we wanted a different "cool" name so we search all over for that perfect name, we came up with a list of about 10 names, the list came down to I am shelter and convalesce, then we looked up the meaning of convalesce (Recover one's health and strength over a period of time after an illness) and for the new message we wanted to give, it was just perfect, a new beginning and all for the better of us all.


How the band started??
We started around Feb. 2006 I believe, we all knew each other from playing shows together in different local bands. When all of them broke up Anthony and Gerardo "former guitarist" decided to do a new band, after jamming with David and brother Elston they quickly decided to have them on board, we wrote two songs in one day, we were stoked that we finally had people to write the music that we wanted to write then. But we were still short member, hats when Anthony and Gerardo spoke to an old friend called Luis to audition for the band as our bass player, after the first practice together we all agreed that he was meant to be, so quickly we became huge at our local scene back in Puerto Rico. We played shows almost every weekend, and sometimes twice a week. A year after we went into the studio and recorded "For ever you remain" all of us being straight edge decided to write music towards this direction. So a promise never broken became x promise never broken and our 7 tracks Ep came out. After a couple of years playing shows and such we all felt like we needed more, we were convinced we could be more than who we were, but in order to accomplish it we could not do it in Puerto Rico, so we decided to move to the US, and so we did. We all left everything behind and moved to Jacksonville Florida and with this new start the band was born again. We changed our name and music and we began again. Convalesce was born and this time the band was no longer just straight edge, but this time so much more, we all saw how our world was full of hate and we knew something needed to be done, so we then started to write music to give hope and show the love of Christ to others. "We can’t change the world but we surely can plant a seed". After 4 months Gerardo decided to leave the band for personal reasons and we all respected his decision, and so he did. In august of 2009 we started the production and recording of our latest Ep that was later released in November of the same year. And that’s how we were made.
Anthony, Vocals
David, Guitarist and Vocals
Luis, Bass
Elston, Drums

What's the message to transmit with your music??
Like I said before, hope and love. There is still much worth fighting for.

What's your method at the time of writing a song??
Most of the music is written and recorded by David (guitarist) " I grab my guitar, turn on the computer and start writing riffs, as soon as I write something I like, I program drums with Superior Drummer and record with pod farm and adobe audition, after I get everything recorded ill show it to the guys and then the song gets it shape, it takes us about a week to have a song and then we take as much time as we can perfecting it.

Which is your music influences??
Life, hope and heavy music. Bands that we are influence by: Underoath, veil of Maya, we came as Romans, periphery, for the fallen dream, it prevails, impending doom, as cities burn, and much more.

What plans do you have for the future??
We have a new management company (Realistic Artist Management, Don Henson) we will be recording new songs and shopping for labels and hopefully put out an Lp under a big label, and just start touring non stop and get our name out.

If you were stranded in the middle of nowhere after a show or while on tour. The help is 100 miles away from where you are, ¿Who would you send to look for help?
I think we would all go but if we have to send some one, it would be Elston and then he would make David go with him.

And if while the rest wait, there's no food and the only way to feed yourself is by eating each other, ¿Who would you eat first?
Luis, he has the most meat.

Which country you guys would love to play?
Paris, France.

Are you OK, with the direction the band is going actually?
We are doing very good, so far people have been amazing supporting us and everything is working out almost the way we want it to be, perhaps a little bit slow but I guess it all takes time, but with Gods help we will overcome it all and be were we need to be.

Check out more from Convalesce by going to: http://www.myspace.com/xconvalescex
Publicado por Vents en 10:56