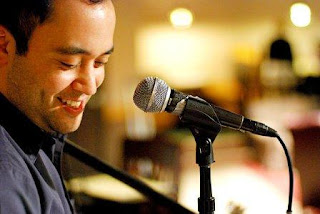 1. How did you get started with all this?
I've been songwriting for 20 years, having written my first song at 13.  Songwriting just sorta happened... I had been trying to teach myself guitar and got bored playing "Kumbaya" week after week.  Plus I didn't have the discipline to practice.  But I did have the discipline to write songs, surprisingly.  Maybe that's because I could write lyrics while in class and the teacher would think I was taking notes.  Rebellious folk-singer, ftw, bwahaha.

2. What's the message to transmit with your music?
It's shifted a bit over the years.  My earlier songwriting was very political and angry -- but heck, I was in my early 20s so it worked at the time.  But now at 33, most of my songs are personal (like that song by Fergie, hahahah).  And in that way, since they're often about love and relationships, I think anyone who's ever fallen in love or fallen out of love can relate to them.  I hope that my music ultimately helps listeners know that whatever they're going through, they're not alone.  Those are the serious songs.  As for the goofier ones (like "Magnificently Lonely" - about finding out you're being divorced over MySpace), I'm hoping people can giggle and appreciate the songs in all their quirky glory.  Because really, if you get divorced over MySpace... ouch!

3. What's your method at the time of writing a song?
I usually come up with lyrics and a "scratch" or draft melody.  Then I try to play around with new chord progressions, new phrasing, and a LOT of capo-ing to force my voice into different registers.  Oddly enough though, the best melodies usually come to me when I'm walking around or going for a run.  Otherwise all the chatter in my head blocks the tunes from coming out.  And for some strange reason I'm usually the most fertile (ew) with songs 3 months out of the year.  The other 9 months are me sitting watching the tumbleweed fly by as I try to edit the s*it out of the songs and clean them up.  Above all, I have found that messy breakups make for great songwriting material, though I wouldn't want to go on the record recommending dysfunctional relationships just to get... inspiration :X

5. What plans do you have for the future?
I'm setting up U.S. West Coast and East Coast tours for 2011 and possibly looking to the rest of the U.S. in 2012 and then other countries in 2013 (well, assuming the world doesn't end in 2012!)  But when not on the road, I'm promoting my latest album (in this case "Japanese Satellites") through the regular social networking channels (e.g. Facebook, MySpace, YouTube).  Knowing that the music business models are shifting at light speed, I'm always wondering how I'm going to make ends meet a few years out.  So the future plans may have to change radically.  It's scary and exciting at the same time.

6. Which has been the funniest prank you have been or took part while on tour or after a show?
I don't think us folkies are known for being pranksters, though I have gotten smacked on the head with a microphone by an affectionate and rather drunk band member.  I've also had a drunken man - who claimed to be Richie Havens' brother - come up on stage during a show years back, interrupt my set, and then tell me I was playing the djembe all wrong, while proceeding to give me a demonstration that I never asked for.  That was quaint.

7. If you were stranded in the middle of nowhere after a show or while on tour, the help is 65 miles away from where you and your band (If any) are, who would you send to look for help? And if while the rest wait, there's no food and the only way to feed yourself is by eating each other, who would you eat first?
Oh em gee, what a question!  Hahah.  Given that I tend to waffle between self-pity and total go-getter-ness, I'd probably first cry and be all like "woe is me!" but then I'd get all nomnomnom hungry and realize that dying in the middle of nowhere is so NOT folk-rockstar-like, and I'd walk over to the nearest service station.  Granted I'd be walking for the better part of the day but still... As for no food, I would probably eat my guitar.  Not very tasty but loads of fiber.  And it would give me an excuse to buy a new guitar too...

8. Which country you would love to play?
Just one?  Hrm - well Australia seems large enough to entertain me and my a.d.d. for several lifetimes or more.

9. With which bands you would love to share stage?
Spitz, first and foremost.  I am enamored with them.  Then comes the Postal Service but they never perform anywhere :\  Billy Joel, R.E.M. and U2, though I'd probably s*it myself out of excitement, Erasure (though I couldn't keep up with the sequins, feather boas and body glitter that Andy Bell wears during the shows) and Simon & Garfunkel (if they ever regroup again).

10. Are you OK, with the direction the band is going actually?
What direction?  Who?  Me?  I think I usually have direction and then I see a butterfly go by and chase after it.  But generally, knowing that it's tricky to assess success in this business, I'm pretty satisfied with how things are progressing.  As a solo artist though, I won't lie - it can get very overwhelming and there have been moments when I want to throw in the towel and get a respectable career.  But for some reason, I keep coming back to music.  And as much as the unstable/unpredictable future of the industry scares the crap outta me, it's also a very exciting time to be a musician.  I don't have to beg a record label for validation.  Wohoo independence (without the requisite poverty), hahaha.