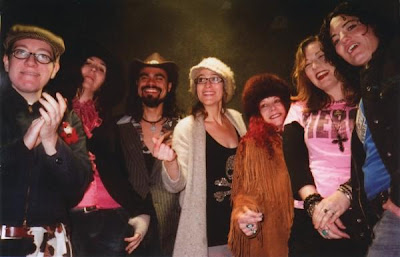 What's the meaning behind the band's name?  The name “Evangenitals” is a spirit soup combination of the concepts of “Evangelism” and “Genitals.”  According to Webster’s Dictionary this simply means that we are “passionately zealous” about the “origins of creation.” We like to think of the band name as a beacon (and a warning) that absolutely ANYTHING can happen in our world: no topic is too far out, no idea is too challenging, no musical genre is off-limits, and no lyrics are too sacred or profane to be sweetly crooned or howled at the top of our lungs. Being in a band called the Evangenitals gives us the freedom to explore and express whatever comes our way, and anyone coming to see a band called the Evangenitals is definitely agreeing to take a wild trip.

How did you guys get started with all this??  The real band "moment" happened one late December night on a long drive home from Ventura County, where Lisa and I had spent the day playing Dance Dance Revolution and eating tacos on the beach. We were lost and trying to stay warm in my topless 1988 Suzuki Samurai jeep by singing Christmas carols at the top of our lungs until our voices were ragged. Laughing uncontrollably we said, "Wouldn't it be hysterical if we signed up for Arlo's open mike at Mr. T's Bowl (in Highland Park) and did our version of O Holy Night?" And we did. The rest is history.

What's the message you try to transmit with your music??  Love. It has a lot to do with the embracing of all things between heaven and earth, from the sublime to the profane, and having mad love for all of it. The guiding principles of our art and our action are, in short:
The goal is creative freedom, and sharing as much of ourselves as possible with an audience. Putting the commune back in communication.

What's your method at the time of writing a song?? Every song is different, and I can’t say that there is a specific “method” that has emerged. Half of the songs I write seem to start in the shower, or in the car. Sometimes it will start with the chords, and I’ll fall in love with some rhythm or progression that gives birth to the tune. Sometimes I’ll be singing random things in the shower/car and come up with the chorus, or just a melodic line I like. Sometimes I set out to really address something specific, like when I wrote “The Lee Shore”… which is based on Chapter 26 of Moby Dick.  Mostly I just stay open to whatever method shows up. Openness is key!  In the beginning I’d have to privately play my songs to Lisa Dee before sharing with the group, because I was really shy. I still do that most of the time.
What are your musical influences?? Our influences are all over the place, as are we. In no particular order, we have been DEEPLY influenced by Bob Marley, Frank Zappa, Otis Redding, Richard Strauss, the Ramones, the Muppets, Kris Kristofferson, David Bowie, Dead Milkmen, the Beatles, MC Chris, Ween, Stevie Wonder, Janis Joplin, ABBA, Sesame Street, Low, DJ Quik, Frank Black & The Pixies, Patsy Cline, Rolling Stones, Dolly Parton, Captain Beefheart, Linda Ronstadt, Johnny Cash & June Carter, Neil Young, Jimi Hendrix, Eric McFadden, Charles Mingus, Willie Nelson, Francoise Hardy, Eydie Gorme, Curtis Mayfield, Fleetwood Mac, Bill Withers, Band of Horses, Mitch Hedberg, Nina Simone, Steve Martin, Jackson 5, Bill Cosby and way too many others to list. We love music. LOVE. And we’re going to be kicking ourselves for months thinking of everyone we left out of this list. It is endless.
What plans do you guys have for the future?? Having ludicrous amounts of fun, making ridiculous amounts of music, traveling to an obscene amount of countries, and touching a lot of people’s secret places inside.

Which has been the funniest prank you guys have been or took part while on tour or after a show?? We’re not really pranksters. We have trust issues. But you could ask our drummer Kristy McInnis about the “spider incident”…  we’re sworn to secrecy. (But we think it was Andrea… maybe Nathan)

If you guys were stranded in the middle of nowhere after a show or while on tour, and the help is 65 miles away from where you guys are: Who would you guys send to look for help? And if while the rest wait, there's no food and the only way to feed yourself is by eating each other, who would you eat first? Wow. Okay. We asked this question to the group at a rehearsal and I will honestly report exactly what was said: Lisa: “Who says we need help?”, Andrea: “We would start a hippie commune.”. Henry: “(Silence. Henry is a man of few words. But he’s smiling.)” Anonymous: “Eat? Like oral sex?”  (okay, that was Andrea); Super Anonymous: “The women folk would spontaneously begin to produce soy breast milk and feed the others.” (okay, that was Juli), Nathan: “I love soy milk!” Kristy: “Hey-yo! (ba dum bum… she’s the drummer)” Yes, that’s how we roll.

What country you guys would love to play? All of them. Repeatedly. Starting with getting back to the UK. And soon!

With what bands you guys would love to share stage?? See influences above… All of them. And Madonna. And U2. And Gogol Bordello. And anyone else who is awesome. We like awesome.