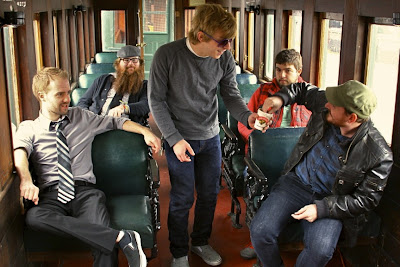 What's the meaning behind the band's name?
The name comes from the 1932 film Grand Hotel, the only movie to win Best Picture without being nominated in any other category.

How did you guys get started with all this??
The core of the band began playing together in high school. Aaron LaChance (drums), Jason Elvin (bass), and Glen Capen (guitar) had been a part of several bands throughout high school and wrote music together in college and afterwards. Kyle Gervais (vocals/guitar) became introduced to group through mutual friends. Kyle and Glen have always had a knack for writing and composing and we figured out pretty quick that there was definitely some musical chemistry between them, as well as the group as a whole. Six months after becoming a unit, we wrote and recorded a six song debut EP (released in August 2009). Almost a year later, we decided to add a fifth member, Michael Reid, for extra color and character.

What's the message to transmit with your music??
The message we're trying to transmit? Raunchy Sexytime.
What's your method at the time of writting a song??
Kyle, Glen and Michael are the creative jump-starts to any song constructed by GRAND HOTEL. The three will individually, or cooperatively, bring 3 to 6 song ideas to the table. Aaron and Jason will then throw a groove under the form while guitars and vocals fill out the melodies.

Who are your music influences??
We each come from very different areas but I would say altogether, our influence would be music in general.

What plans do you guys have for the future??
GRAND HOTEL’s immediate plan is to keep writing music and producing albums. In a year or so, we plan on touring the Northeast and eventually expanding the trek to run from Maine to Florida.

What has been the funniest prank you guys have been or took part while on tour or after a show??
While playing a 3-day festival, we started spreading the rumor that Justin Bieber was playing "secret sets" at 2:45, AM and PM, but to keep it on the down low. Eventually, we started hearing people asking if anyone had seen Bieber's set because they had missed it and heard it was sweet.

If you guys were stranded in the middle of nowhere after a show or while on tour. The help is 65 miles away from where you guys are, ¿Who would you guys send to look for help? And if while the rest wait, there's no food and the only way to feed yourself is by eating each other, ¿Who would you eat first?
We’d send Aaron... he can walk faster since there is very little air resistance.

We’d eat Michael... because he's the new guy... he’d probably taste like whisky... and we could build a debris hut out of his beard to keep us warm.

What country you guys would love to play?
Brazil. Kyle has been obsessed with learning Portuguese and moving there for far too long. Playing there would give him an excuse to do so.

With what bands you guys would love to share stage??
Like play with at the same time? Nobody. Kyle doesn't have enough room to move around as is. But together at the same show? Oh, the usual giants. Radiohead,Gorillaz, Flaming Lips, Grizzly Bear, Phoenix, U2. To be honest, we'll play with just about anybody as long as they aren't named Chad Kroeger or on the stage with us at the same time. We really need to make that clear.

Are you guys OK, with the direction the band is moving so far?
Absolutely. We keep trying to push ourselves further as musicians but also have as much fun as possible with the songs we're writing and playing. Plus, we really want our audiences to have a good time so we're always working to make it as much of a party as possible for everyone involved. And we feel, if we're having fun, they're having fun. We think, at least.