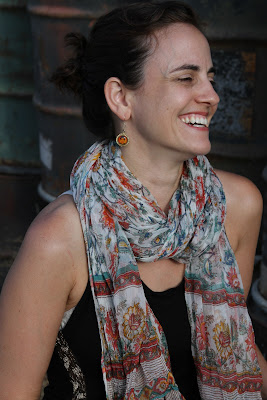 How did you get started with your music career?
I was born on a kibbutz in Israel, but when I was seven years old we moved to Melbourne Australia. There my ears open and I started to listen to amazing music and sing at every opportunity. When I came back to Israel I studied music in high-school, sang and played guitar in some bands but only when I lived in new-york (where I went to college) I decided I want to write my own songs and I started my path as a singer-songwriter…
I would sit and listen to music for hours, read the lyrics of every song I loved and worked with different musicians who taught me how to say what I want in a song.
In 2005 my debut album "waiting on a shelf" came out – whom I worked on with Assaf Spector and Gil Gilmore.
What are your influences for your music?
My first cd's ever were Paul Simon, Janis Ian, Leonard Cohen…. Of course it was the 80's so I listened to Michael Jackson, Madonna and some good Australian bands like Inxs.
Later on I fell in love with The Beatles, Tom Waits, Joni Mitchel , but as a teenager I listened to Nirvana, Pearl Jam and Radiohead (like everyone else… no?)
Today I have so much music that I love- from Wilco to Johanna Newsom, Beck, the Strokes, Alela Diane and Cat Power.
What plans do you guys have for the future?
My new album "Modern Grace" is coming out this April.
On March we will be performing at the SXSW Festival in Austin, Texas and then we have some gigs in New-York. After that we'll have a big album release show in Israel and then I'm hoping to tour with my new album.
How would you define your music?
The hardest question ever…. Very intimate, mature, soft but edgy….i don't know- very me.

What has been the funniest moment after a show or tour?
I can't think of one incident, but I have a weird craving for a Hamburger after I sing – I just need meat! So my friends know that after each show we are all gonna go to a burger joint and we already mapped out Tel-Aviv for the best burgers.
What song can't you get out of your head?
It obviously changes according to my mood and there are so many songs that follow me for years. For now- will it sound vain if I say one of my songs? It makes sense though- I'm mixing my new album so I only hear them.
Do you feel you are moving on the right way?
I hope. I think so. I feel that I worked on my new album in the right way- taking my time, finding the sound, figuring out what's right for each song, recording at the best places and I hope that the authenticity of the songs will come out.
I just signed with a manager in the states and I'm hoping that the show at South by South West will get things rolling. And the most important thing is that I feel that I'm getting better all the time. That's rewarding.