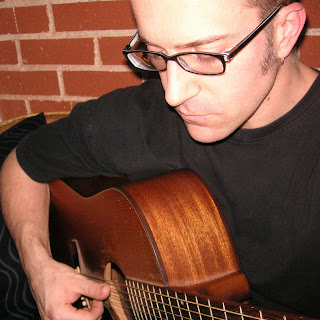 How did you get started with all this?? The music on my new Mannerisms Magnified CD all began from a challenge I gave myself, back in 2005: To write an entire record of unpredictable, eclectic rock music that was fun for me to listen to, and produce, perform all the instruments (voices, acoustic and electric guitars, bass, real acoustic drums, piano, accordion, and mandolin), arrange, and engineer it myself—including doing the disc's artwork. I always wanted to do something like that—create, record, and present music that was very personal, musically and lyrically, but have it be a full rock band record, with every sound played by the actual person who created it. I didn't expect it to be so hard and take so long! (I have a YouTube documentary slideshow video that shows every detail, how the album was written, recorded, mixed/mastered and packaged, step-by-step.) People who are fans of solo artists like Jeff Buckley, Jon Brion, Elliott Smith, Joseph Arthur, and Sufjan Stevens, as well as those who dig bands like Mr. Bungle, King's X, Radiohead, Jellyfish, X.T.C., Beach Boys, and Queen seem to be enjoying it! That makes me very happy.

What's the message to transmit with your music??
For me, it's always been more about the music, than any message. Musically, I'd say my "message" is to expect the unexpected! I try hard to put some unexpected twists and turns in there. Lyrically though, many of my songs focus less on "relationship"-type subjects, and more on areas like women's rights, death, drug abuse, racism, religion, certain types of psychological dysfunction—even child abduction. Maybe, in general, I'd say an overall message could be, "Be open-minded and nonjudgmental towards others. And steer clear of toxic individuals."

What's your method at the time of writing a song?? Most of my songs begin on the acoustic guitar—I come up with a chord progression and style of playing the chords that I like, then create different sections that just "feel" right, which might involve a key change, or a meter shift, a different rhythmic way of playing, or simply switch from playing fingerstyle to strumming with a pick. The song might be only a minute long, or somewhere near six minutes—whatever works! When the song structure seems there, then I come up with a melody. I don't ever try to "force" anything; for me it's better to wait till the right melodic idea naturally comes. Then I write lyrics after I've completed the music.

What plans do you have for the future?? I plan on continuing to work my Mannerisms Magnified record for quite a while. At the moment, I'm looking into licensing two of its instrumental tracks—"Brian on the Brain" and "Solace Song"—to an independent film. There are also some other songs I've submitted to television shows that would be great, if it works out. And my song, "Hiding Place," will be coming out on a couple compilation CDs shortly. I'll also be shooting a video for "She-Hab" pretty soon, which should be pretty funny, if it turns out the way I'm planning! Hopefully that will expose the song to some new people. Right now, I'm also trying to get some airplay on Internet radio sites like Pandora and Slacker; in the near future, I'll also be trying to go to satellite radio, and other broadcast outlets. And I have many new songs which I have yet to record, which I will play live, when I start performing more by the end of this year, once I take care of a few things. But I'm not going to record anything new for a while. I will basically do what amounts to "touring"—and other kids of promo—for two years, or whatever seems right. That's as far into the future as I can see now!

Which has been the funniest prank you have been or took part while on tour or after a show??
Hmmm… I remember, years ago in Canada, a bandmate crawled out of his hotel room, walked along the outer edge of the hotel—four or five stories up—and came into our room through the window, at night, and scared us. I was a victim of that prank! But he easily could've fallen and died. I spoke with a fake German accent at some shows in Germany once, which was kind of funny, at least to us. I'm not really sure why I did that though. I guess I've not really been part of any great pranks yet. I need to get out there more!
If you were stranded in the middle of nowhere after a show or while on tour. The help is 65 miles away from where you and your band (If any) are. Who would you send to look for help? And if while the rest wait, there's no food and the only way to feed yourself is by eating each other, who would you eat first?
Well, since nowadays, I do shows as a solo act, with the exception of a few where my wife joins me on piano and backing vocals… I guess if we were that far away from civilization, and the only way one of us could survive was to eat the other, we'd have to flip a coin! No, I'd let her eat me. Or we'd slowly devour each other and bleed to death, despite being fully nourished.

Which country you would love to play? Honestly, I'd love to play in any country I could! Years ago, I played in Germany and Amsterdam, which was great. And I've played a bit in Japan, and Canada, which I loved. But I guess I'd really love to play in Europe and the U.K.; maybe I'll have to put England and France at the top of the list? Though Spain, Australia, and tons of other places would be great too. It's impossible to pick just one; there are so many great places to visit in this world!

With which bands you would love to share stage?? Well, I think my "solo artist" list would be longer than a "band" list. I'd be honored just to play in the parking lot at a Jon Brion or Joseph Arthur show! Jimmy Gnecco, Ani DiFranco, or Aimee Mann would be a great fantasy too! And Neil Young! If I could go back in time, I'd do anything to share the stage with Jeff Buckley, or Elliott Smith. Band-wise, opening for Ours, Mr. Bungle, Primus, or Radiohead would make me and my family proud.

Are you OK, with the direction the band is going actually? So far, so good! Among other things, I'm very happy that I just got a great review in Guitar Player magazine. They referred to Mannerisms Magnified as: "Smart pop tunes that are crammed with interesting guitar parts and tones ... Like what the Beach Boys might do if they were on an acid trip that was on the verge of getting out of control. Yeah!" Needless to say, I was pretty pleased! I'm just happy to be making music that I feel so directly connected with, and can't wait to play these songs live. I'm also very happy to speak with you, and get featured on Vents Magazine! So yes, I'd say I'm happy about the direction so far. Thanks so much for listening!