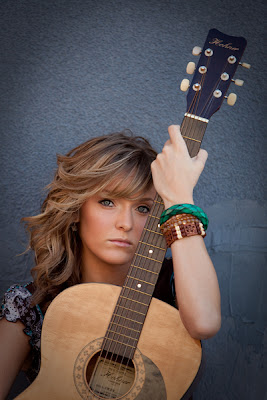 How the did started with all this?? I started singing when I was LITTLE. I have video of me singing before I could talk. My first recording was when I was 3, and I started performing when I was 4. I grew performing in music groups and in musicals, and was in choir in High School, but switched to being a solo singer when I was about 18. When I was 19 I moved to Nashville, where my genre slowly switched to country/pop. From there I realized how deep my love for music, singing, and performing really was and after I auditioned for "American Idol" when I was 21, the ball really started rolling from there. Since then I have released an album and a music video, gone on a mini tour and look forward to what this next year will bring!
What's the message you want to transmit with your music?? The message of my songs are all positive ones. I know that not all situations and experiences we go through in life are positive ones, however I think we can have a positive attitude through hard times. That is the message of my music. There is a power in being positive.

What's your method at the time of writing a song?? Every song is different, thus the process of writing song is different. There are some songs I have written where I sit down at the guitar or piano and write it, from beginning to end, in about 30 minutes. Other songs take months to write, fine tune, rewrite and perfect. I am very particular when it comes to what I sing and how I sing it, so sometimes it comes the first time, while other times it takes a few tries!

Who are your music influences?? My musical influences vary. I grew up listening to Jazz, Pop, Musical Theater, Rock, Classical, and everything in between. I love Etta James, MIchael Jackson, Christina Aguilera, Eva Cassidy, Celine Dion, Michael Buble, Jack Johnson, Keith Urban, and many others. My style is a mix of them all. I don't think you can be a musician who really appreciates music without allowing these types of amazing musicians to rub off on you and affect you in such a way that infects your music as well.

What plans do you have for the future?? I have many hopes and dreams, but very few plans for the future! This life changes so fast and so many unpredictable things happen and you never know what your future holds. I love touring and performing, so I hope that is in my future. I love music and I KNOW that will be in my future, in one way or another. Sometime in the future I would love to get married and have a family, because you can accomplish the best things in life, but unless you have people to share them with, they don't mean as much. There are so many things I want to do. My life has changed so drastically over the last 5 years, I can't wait to see what the next 5 have in store!

What has been the funniest prank you have been or took part while on tour or after a show??  I am one that is always pulling pranks, or getting them pulled on, however I can't think of any on tour! Now that is not to say that we don't have fun! We laugh more than anyone I know when we're out performing. This last summer was a BLAST, because we were out with another group and our bus was filled with about 12 people. That was a great few months! I think this tour I was more of the joke telling type, rather than the prank pulling type. I guess I will have to change that next time, so I have a better answer to this question!

If you were stranded in the middle of nowhere after a show or while on tour. The help is 65 miles away from where you and your band (If any) are, ¿Who would you send to look for help? And if while the rest wait, there's no food and the only way to feed yourself is by eating each other, ¿Who would you eat first? Ha. This is a good question. Well 65 miles is not too far - and I think I could go that long without food. Plus I liked all the people I toured with last time, so I don't think I could eat any of them. Who would I send though... good question! I would probably send a group - a mix of guys and girls. Depending on how big the group on the bus were, maybe 2 girls and 2 guys, so the others could stay in the bus. That way the guys could protect the girls and the girls could be the voices of reason. Without the guys, who knows if the girls would come back, and without the girls ... who knows what the guys would come back with!

What country would you love to play? I played in Europe last year and loved it. I was over in Venice, Slovenia, a few places in Austria, and in Poland. I would love to go back to all of those countries, but I would also love to #1. Visit more of Italy, #2. Go to China, #3. Go to New Zealand, and #4. I think Africa would be amazing!!

With what bands you would love to share stage?? There are so many! I wish I would have been able to sing with the great Michael Jackson. He was probably the greatest entertainer the world has ever seen. Country wise, I would love to share the stage with: Keith Urban, he has an energy on stage that is incredible, undeniable, and contageous; Martina McBride, she has a way of being able to sit on a stool in the middle of the stage and capture an audience like non other. It's amazing. Other than that, there are many other artists in many other genres who are talented musicians, singers, and entertainers who I know I could learn a lot from and would be honored to share the stage.

Are you OK, with the direction the band is moving so far? I love the direction the band is going. It is constantly changing and I think will continue to change until we get it "just right", which I am sure will never happen. I don't know if there IS a "just right" in the music industry, because times, people, music, and the need for music is always changing. Thus, we change with the world and the dynamic of the stages we perform on.