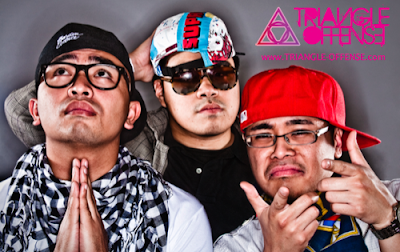 What's the meaning behind your name?
The term comes from basketball. We're all HUGE basketball fans. We like to see ourselves as a triple threat -not just because we're 3 people-, but more because we write, produce and perform all our music on our own.
How did you guys get started with all this?
Sci and Bry met in grammar school, but started rapping together around high school. Bry knew Pwol and introduced him to Sci because Pwol needed a producer. We were recording and making music together often, so we naturally decided to make songs together. It became bigger and more serious as time went by.
What's the message you guys want to transmit with your music?
To just live life. You can just be you and be cool. You don't have to conform to how society says you should be and what you should like.

What's your method at the time of writing a song?
There's never a set way! We're firm believers that the best music comes in the moment. You can never force music. It never comes out good. You can always tell when the music is trying too hard.
Who are your music influences?
Of course, we love Hip-Hop -Jay-Z, Nas, Kanye, Drake, Wale, J. Cole, Theophilus London-, among others. (We also gotta show love to Wu Tang and Dipset!) We listen to all types of music though -Billy Joel, Passion Pit, Florence + The Machine, Michael Jackson, Janet Jackson, Taking Back Sunday-...the list goes on and on!
What plans do you guys have for the future?
Musically, our main focus is our trilogy of mixtapes on the way. It's a love story told in three parts. We released "The Courting" last April, which was the first part. The next one is "The First Love", then the finale, "The Break Up", comes after that. Of course, we look forward to performing in different places and reaching all types of people with what we're doing. We want the opportunity to meet everyone that enjoys our music and show them our gratitude through our stage show.
What has been the greatest day as a musician?
This might sound cheesy, but every day is great because we're doing what we love. We're even thankful for those days where things go wrong, because without them, we couldn't full enjoy the days when everything goes our way. The struggles make those victories so much sweeter!
If you guys were stranded in the middle of nowhere after a show or while on tour, and the help is 65 miles away from where you guys are, who would you guys send to look for help? And if while the rest wait, there's no food and the only way to feed yourself is by eating each other, who would you eat first?
We would try to call Jack Bauer from 24, Jason Bourne, or MacGyver because those guys can get out of ANYTHING. MacGyver would be last resort though, because he's kinda old now. If we had to eat each other, Sci and Pwol would probably team up because Bry's bigger than both of them. Sci likes his meat Medium Rare though, so Bry wouldn't be in much pain because they wouldn't cook him too long.

What are your hobbies?
Of course, we love to watch basketball. We each like different teams, too, so it gets interesting when our teams play each other. We love going out to eat. We're foodies! We especially love burgers. Each of us has our own favorite burgers list. It gets really serious.
What country would you guys love to play?
Our homeland, the Philippines! Pwol has performed there, but we've never performed all together.
With what bands would you guys love to share the stage?
Passion Pit or Holy Ghost! Their stage shows are so sick. They would also compliment our music so well because we all strive for similar sounds.
Are you guys happy with the direction the band is going?
VERY! We had an idea a year ago and it's so great seeing our plans come into fruition. It's one thing to think about it, but to actually live it is indescribable.