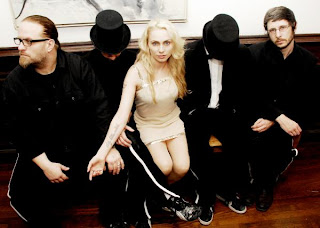 Back in February of this year, I went along to the Academy in Birmingham to shoot / review Lacuna Coils midland’s stop on their winter tour. Whilst I was a little disappointed by their performance (just not my kind of thing I suppose), I was truly blown away by one of the two support bands on the night - the ‘Dirty Little Rabbits’ (read my review of the gig here…. http://www.midlandsrocks.co.uk/reviews/live-rock-reviews/lacuna-coil-birmingham)

After the show, I was lucky enough to meet band members Stella Katsoudas & Shawn Crahan and their friendliness and enthusiasm for the band really shone through. Stella was then kind enough to answer a few questions about the band, their time in the UK and the their future plans.

JC - Your show in Birmingham, UK with Lacuna Coil blew me away.... How did you enjoy your first trip to the UK to perform with the Dirty Little Rabbits ? Any interesting tales from the road to tell ?
SK - We had an absolute blast!!! We were doing a photo shoot and we noticed G.E. Smith (* lead guitarist in Hall & Oates - JC) was on the street. Jeff kept looking at him and finally ran after him to tell him what a hero he is. He was cool as hell, and Jeff was glowing for the rest of the day.

JC - Your music is very different and seemingly caught a few people by surprise at the Birmingham show. For me, rather than describing your work as simply ‘alt rock music’, I would refer to it as almost ‘alternative performance art’. How would you describe your music ?
SK - Our music is pop. its got a unique sound, but let's face it. its pop.


JC - Your show was as much a visual performance as it was an aural experience.... I felt like I was watching a balletic circus freak show (very much in a good way !). How much importance do you put on the visual element of your performances and wider work ?
SK - The visual element is a reflection of what our rehearsals are like. for instance, Shawn taught me how to use a phase foot pedal on my vocals. now I'll incorporate it in the live performance. I think, our live show is the best version of ourselves enjoying what we do.


JC - Is the writing process a collaborative effort, or do one or two of you take the responsibility for writing each song ?
SK - The writing is a fully collaborative effort. in fact, right now, we are in Shawn's basement, writing and recording. its like an assembly line, lyrics all over the walls, recording gear everywhere, writing and recording multiple songs simultaneously. each band member embraces their individual roles in the music, and it changes from song to song.


JC - Stella, your vocal style is sensational.... Kate Bush must have been a big influence on you. Who else would you credit as an influence in your development as a vocalist ?
SK - Thank you! yes, I am heavily influenced by Kate Bush and even more so, by the Cocteau twins.


JC - You’re on the Warped Tour throughout the summer in the States, alongside some other pretty cool bands like the Dropkick Murphy’s.... how much are you looking forward to the tour ? and who on the Warped tour should we be listening out for over in the UK ?
SK - WARPED TOUR IS OUR DREAM COME TRUE!!!! WE ARE ALREADY IN FULL REHEARSAL MODE FOR IT, EVEN THOUGH IT DOESNT START UNTIL JULY. All bands on warped are cool. its a prestigious thing to say, 'I played warped'.


JC - You’ve released two EP’s so far (Breeding ’07 and Simon ’09). I understand that an album is in the pipeline. How’s that going and when will we get to hear it ?
SK - The album is recorded, mixed, mastered, delivered and Shawn is almost finished with the artwork. may 11, we hope (* The album was released in July…. See my review below - JC)


JC - Any plans to tour the UK in support of an album ?
SK - Hell yeah! we'll be back for the festivals in a few months!


JC - Finally, one last lame question ..... if you could put together a ‘dream’ bill..... who would be on it alongside O.K.‘s. ? For me, I’d love to see you guys play alongside Mellissa Auf Der Maur and Alice in Chains...
SK - Janes Addiction for Shawn, NIN for me.