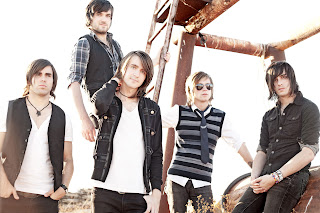 RV: So how’s Warped Tour going so far?
Brooks: So far it’s going well. It’s only been two days so I’m not sure where it’ll end up but right now I’m enjoying it. It’s been a nice California weather so I can’t complain, especially being on the bus.

RV: Are you guys looking forward to anything in particular throughout the tour?
Brooks: Yeah, the barbecues!

RV: Okay, so tell me the brief history of how you guys started?
Brooks: Yeah! Um, there were two bands out of Tallahassee, Florida. Uh, we decided to join up together and we made Mayday Parade! We started, made our own EP, self released it, went on Warped Tour, sold a lot of copies, got a buzz on myspace and the rest is history!

RV: You guys were on the Take Action Tour along with We The Kings and Call The Cops among others who are also touring on Warped. How was it?
Brooks: That was really good, and you know we’ve toured with a lot of bands that are on this tour, on previous tours and even tours coming up that we have. We know we’re going to be out with some of these bands so it’s really cool to come back and do these tours again with these people whether it was Warped Tour or another tour. A lot of acquaintances and a lot of friends.

RV: Last year, you guys released Anywhere But Here. Do you feel that you guys are getting a good response from your fans?
Brooks: Yeah! I think it’s really good! We play Anywhere But Here as one of the tracks we do on Warped. Um, and it’s actually really cool to see the kids singing along to those songs and Kids in Love as well. You know, it’s almost equal with some of the other stuff, even though this album hasn’t been out for even a year yet, it still is... You know what I mean? It’s still like building, moving numbers, and you know, it’s something that could rival with our last full length which is really cool to see. You always wonder when you come into a release if its going to fall off and I think it worked out well.

RV: How would you compare Atlantic to Fearless Records?
Brooks: I would say there both good at two different worlds and actually we work together. Fearless is still a part of this record. They’re great at building. Fearless is awesome at building the ground. They know the streets, they know the kids, they know our fan base and Atlantic picks up from where that leaves off. They got the muscle to help build you into the future,to help push it further than Fearless can. So the two working together really bridges that gap nicely. Like Atlantic has the radio and the big promotion. It’s cool to have both.

RV: What are Mayday Parade’s goals for 2010?
Brooks: Well, hopefully just tour and tour. We’re probably going to get ready to start writing some more music. Which we’ve actually already done you know? ‘Cause why not haha! We’re musicians. We just play and write music so we’ll see where that ends up, where the touring ends up. We’ll be done with this tour and we’ll do a Glamour Kills/Fearless tour in the fall. That will be awesome! I believe we’re headlining it. It’s all big cities. We got some more international stuff we’re looking at. We’ll probably do another England run so yeah!