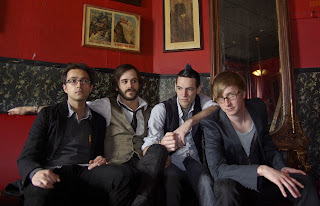 What's the meaning behind the band's name?
We were originally called "Sputnik Sweetheart" after the Murakami book. And we released an EP under that name (This Drama EP). But another band in Brooklyn started up with the same name a few months later and started playing a lot of the same clubs as us. We got sick of being confused with them, so we decided to change our name. We had a bunch of ideas, but couldn't really come up with anything that stuck. Arvi (bassist) is big into classic bicycles, and on the day we we were having a meeting about the name change and he showed up geeking out about this classic Super Mirage bike he'd seen, which is this French company from the 70's. We all really loved the name, and stuck with it. One of our fans on myspace theorized that it's an extension of the themes of deception in our music and about the illusory nature of life. Which is kind of cool. And I wish I had come up with it first.
How was the band started?
Kyle Jarrow (keyboards and vocals) and I (Nathan Leigh – guitar and vocals) met working on a play that Kyle wrote called Love Kills. We got along really well and found our musical sensibilities meshed, so we decided to start a band. We brough Arvi Sreenivasan in on bass and our original drummer Josh Tussin and recorded an EP together. Josh left the band after a few months, and we brought in Drew St. Aubin to replace him. The line-up has been solid ever since. We have a revolving line-up of horn and string players that join us sometimes too.
What's the message to transmit with your music?
I think a lot of our songs are about the lies we tell ourselves and the lies we tell eachother. The thing that I really enjoy about our music is that on the surface level it's fun danceable pop music, but there's actually a lot of depth and even some darkness to the lyrics.
What's your method at the time of writing a song?
Kyle and I write all the songs. Usually the way it works is that one of us will come up with an idea and send the other a demo of it. Then they sort of pick it apart and fix any problems with it. Then we get together and refine it before bringing it into rehearsal where we arrange it as a group.
Which is your music influences?
We have a lot of wide varied influences. Our music is sort of this combination between classic pop like Michael Jackson and Prince, disco, post-punk, and indie rock. We all come from pretty different musical backgrounds, and I think that gives our songs a lot of variety. And we all have a background in theatre so we try to make sure our songs tell a story, and our shows have a lot of spectacle.
What plans do you guys have for the future?

Our big thing right now is our debut record which comes out July 27th. We're doing a huge CD release show on the 28th at Galapagos Art Space in Brooklyn, with burlesque performers and a horn section.
Which has been the funniest prank you guys have been or took part while on tour or after a show?
I feel kind of lame! We're not a very pranky band. Maybe we should start! I'll get Drew on it.
If you guys were stranded in the middle of nowhere after a show or while on tour. The help is away from where you guys are, Who would you guys send to look for help? And if while the rest wait, there's no food and the only way to feed yourself is by eating each other, Who would you eat first?
We'd definitely send Arvi to go look for help. He goes for epic bike rides every weekend, so he'd be able to get help fast. He'd at least have the endurance to make it there and back. I think we'd eat Kyle first. Drew used to work as a chef, so I bet he could cobble together a good meal out of Kyle.
Which country you guys would love to play?
Eventually I'd love to tour South America. Especially Brazil.
With which bands you guys would love to share stage?
Definitely either LCD Soundsystem or George Clinton. Or both. That'd be a fun tour.
Are you guys OK, with the direction the band is going actually?
Yeah, we've been working on a lot of new material since finishing this record which is really exciting. The big thing we're starting now is doing this big “event” concerts with guest performers and stuff. We've gotten this great community of artists and performers around us and I'm really excited to continue building that and bringing more people into it.
Check out more from Super Mirage by going to: http://www.myspace.com/supermirage
Publicado por Vents en 11:06