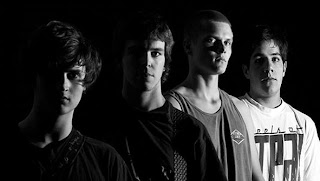 Where the band's name came from? Michael Gossard: The side of a diet soda can (I think it was Diet Rite Cola or something). I was reading the side of the can with all the ingredients on it. Lots of complicated chemicals and acids and stuff - acidic. And that sounded good! We wanted to come up with something that we liked better than Walking to Purgatory.

How the band started?? Gossard: One day I got lonely and ... Well, I started it three years ago, with my friend Kyle Lynch who I taught to play the drums. And he was pretty damn good for never doing anything like that before. We needed more than that so we got his brother Christopher to play bass, and I taught him too. After about a year they had to concentrate more on school so it wasn't gonna work out. We found Matt Whitaker at Loyola High School after putting signs up with "Drummer Wanted" and some broken drumsticks on them - in pretty much every high school in L.A., and he saw the our flyer and called up. Ted Dubrawski was a year ahead of me in elementary school and we kinda knew each other but not really well, until we both wound up at the same high school. He was already in a band and turned me down when I asked him to come be our bass player. But then his band broke up and he was interested. So we had that core of three but we wanted another guitar player to round us out. We tried out several guitar players but had to keep looking for the Just Right one. Finally we put an ad in Craig's List and Michael Thompson answered it. That was last August. And it's been clear sailing ever since!

What's the message to transmit with your music?? Gossard: Don't be afraid to express yourself in your own creative way, and enjoy life! Ted Dubrawski: And don't take anything too seriously!!!!!!

What's your method at the time of writing a song?? Gossard: Random. It's kinda hard to say what's gonna happen - it's always different. I keep notebooks with lyrics and thoughts and ideas in them, and I goof around on the guitar a lot and come up with riffs I like.

Which is your music influences?? Gossard, Dubrawski, Matt Whitaker, Michael Thompson: Everybody from Robert Johnson to Aerosmith, Janis Joplin, The Who, Beatles, Led Zep, John Coltrane, Nine Inch Nails, uh - as we said - well, everybody!

Which has been the funniest prank you have been or took part while on tour or after a show?? Gossard, Dubrawski, Whitaker, Thompson: On tour with Hawthorne Heights, The Story Changes, and PM Today a few weeks ago - we were on the road from Tucson to Albuquerque and we mooned PM Today from our car! We mooned Poppy from The Story Changes too but I don't think he saw us. He threw one of our frisbees onstage.

If you were stranded in the middle of nowhere after a show or while on tour. The help is away from where you are, ¿Who would you send to look for help? And if while the rest wait, there's no food and the only way to feed yourself is by eating each other, ¿Who would you eat first? Dubrawski, Whitaker: Send Andrew Untersee (our Road Manager)! And Zane Taylor (our "Utility Belt") if available. Gossard: And I'd have to go too because I'm the only one with the credit card! Who would we eat first? Dubrawski: It's been proven that drummers can play with only one arm, so Matt would give up an arm. Whitaker: Hey - we should eat Thompson! His shins! Thompson: You would NOT want to eat me because I'd taste really horrible, especially if we're stranded and I haven't showered. Ted you give up a shin! Dubrawski: Well maybe - but I'd be kinda tough. I guess I'd give up a shin.

Are you OK, with the direction the band is going actually? Gossard, Dubrawski, Whitaker, Thompson: HELL YEAH!!!

Check out more from ACIDIC by going to: www.myspace.com/acidicband
Publicado por Vents en 20:22