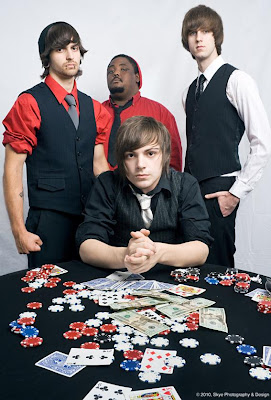 What's the meaning behind the band's name?
There’s no meaning to it, we just made the name back in 02 and thought it sounded cool Haha.

How did all this began??
I (hunter) started it in 02 and Shane joined in 07, Stephan and Brent joined this year.

What's the message to transmit with your music??
We just talk about everyday things most of the time but we also like making stories up and writing music that would feel that story.

What's your method at the time of writing a song??
Well I usually write the base of the song and the others add in and we change it up to fit.

Which is your music influences??
Music in general influences us.

What plans do you guys have for the future??
We hope to get signed to a good label and tour full time.

If you guys were stranded in the middle of nowhere after a show or while on tour. The help is 65 miles away from where you guys are, ¿Who would you guys send to look for help? And if while the rest wait, there's no food and the only way to feed yourself is by eating each other, ¿Who would you eat first?
We would send Brent or Stephan Haha.
I doubt we would eat each other but probably Brent Haha.

Which country you guys would love to play?
I think Amsterdam would be amazing.

With which bands you guys would love to share stage??
There’s way too many to list Haha

Are you guys OK, with the direction the band is going actually?
The direction is pretty good; I think the only thing wed change is wed like to have a label behind us.

Check out more from this band by going to: http://www.myspace.com/sevenstoryfall
Publicado por Vents en 14:00