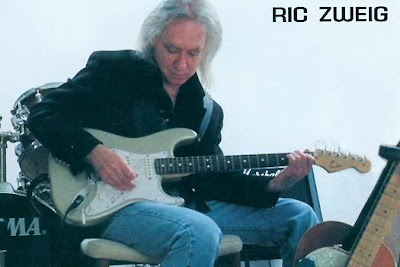 Ric Zweig is a talented guitarist and songwriter who embodies a charitable and grassroots musician that is all but dying of these days. His newest album Running Out Of Time, is a collection of heartland Americana and smooth pop songs, that make you feel fine, and want to hop in a convertible, or buy one. What makes it even better is that five dollars for each his albums sold will go to The American Cancer Society, so not only do you get a soundtrack to happiness and perseverance, you also may give someone else a chance to fight and persevere. Sounds to me like Ric has made a perfect win-win, situation.


Cody Blevins
Vents Magazine
How the band started??
Yours truly was a criminal ct judge for years. One day I got tired of listening to all the lawyer bullshit, and decided to do what makes me happy, music.

What's your method at the time of writing a song??
Got to have a melody first for the verse- lyrics come later. I like to try to make up new guitar chords, when I do; it usually translates to a new song.

Which is your music influences??
Van Morrison, Tom Waits, Radiohead has great lyrics.

What plans do you have for the future??
Future Plans: One day at a time, but have as much fun as possible.

If you were stranded in the middle of nowhere after a show or while on tour. The help is 100 miles away from where you are, who would you send to look for help? And if while the rest wait, there's no food and the only way to feed yourself is by eating each other, who would you eat first?
I would send me, less likely to get lost. I would eat the best looking woman first, but no honeys in the band, so we got a problem.

which country you guys would love to play?
England would be a blast.

Are you OK with the direction you guys are moving?
Things are going absolutely great. So far, the reviews have been terrific, and now being part of VENTS will be one more wonderful thing to have happened for Ric Zweig & The Band.

Check out more from Ric by going to: www.riczweig.com‏
Publicado por Vents en 9:03