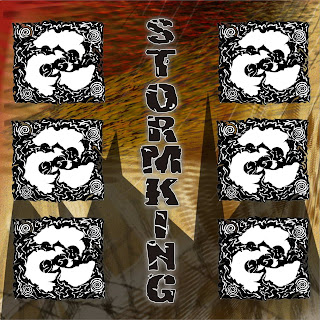 George Clooney eat your heart, this is the perfect storm. A maelstrom of thrash beats, searing locked grooves, gruff spewed vocals, and punishing lyrics, and of course slayer worship. Using elements, of death metal, stoner rock, and straight up metal fury, this band is like a more cynical and faster Anthrax, or a less abstract version of Baroness, and they are not afraid to remain in your face. However, they mix their venom with melody, and this is what warrants repeat drinks of their intoxicating poison vitriol cocktail, that will keep your fist pumped, neck sore, and raise your air guitar skills tenfold.

Where the band's name came from?
STORMKING is a peak southwest of Mt. Ranier that is basically a huge lightning rod---it intrigued me, picturing what/who it could be.

How the band started??
STORMKING started as a project incorporating excellent musicians from different genres around very strong and varied material. I was working at ARCADE RECORDING with Bruce Whitcomb, putting down tunes as a singer/songwriter---as we listened to the playback I started to jam my ideas for full production for each song, Bruce was way into it and used his studio/label (ARCADE/RED ARROW) connections to pull in some of the hottest musicians in the area---everybody involved got jazzed on the groove we hit---so here we are.

What's the message to transmit with your music??
Every tune is a sound and story to itself---my motivation was to allow each song to evolve by not shoving it into a “label”---my “EGASSEM GIB” (backwards-masking) would be to open up to the crazy variety of music/life, push it to the hilt---there is way too much cool shit out there to miss if you close your mind---that is how you get to the edge.

What's your method at the time of writing a song??
I write from the guitar out---electric or acoustic---then melody. I stay with the jam/groove until the lyrical idea comes---it is in the hands of the Muse.

Which are your music influences??
Too many to name, but if I had to define the root it would be the Seattle thing---HENDRIX, MOTHER LOVE BONE, SOUNDGARDEN, TEMPLE OF THE DOG, SCREAMING TREES, just to name a few---it’s about letting it groove it’s own way. What plans do you have for the future?? BIG LIVE SHOWCASES---NEXT ALBUM! I am gigging as a singer/songwriter, small combo, and with full instrumentation---I want to put it all together on the BIG STAGE. Right now I have enough new stuff for a double album---it will be a cool second act!

Which has been the funniest prank you have been or took part while on tour or after a show??
A legal process server had contacted us by accident---after we put him on his way, we told one of the guys who hadn’t been there the dude had been looking for him to serve a paternity suit. He freaked---we let it go for awhile---until we found him huddled in a corner calling his wife. We stopped it before he really screwed up---he was pissed for quite some time.

If you were stranded in the middle of nowhere after a show or while on tour. The help is 100 miles away from where you are, ¿Who would you send to look for help? And if while the rest wait, there's no food and the only way to feed yourself is by eating each other, ¿Who would you eat first?
Would send Bruce because he can fix or wheel-n-deal just about anything. I’d roast the tour manager for getting us stuck---when you‘re on the road everything is their fault!

Which country you guys would love to play?
I want to hit it here in the USA---then Europe---England first.

Are you OK, with the direction the band is going actually?
As long as the music is out front I’m good with it---the attention and popularity STORMKING is generating is solidifying the live band line-up---and that’s cool, but I am always into new sounds/people---it is weird being the DECISION MAKER because I have always been in bands where everybody has a say, but hey, it is working so don’t f**k with it---right?

Check out more from Stormking by going to: http://www.bin666.com/