Johnny Cakes and the Four Horsemen of the Apocalypso 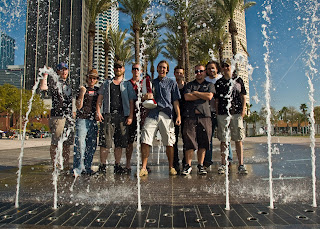 Where the band's name came from?

I came up with the name when I was on a scuba diving trip to Bimini. At a tiny little restaurant I was eating some sort of goat soup and it came with johnny cakes on the side. I thought this name was great and decided to make a band after the name when I got back. The whole "Four Horsemen of the Apocalypso" part got added later to round out the name.

That is pretty much how the band started. I ate johnny cakes and thought the name was funny. Then I asked a couple of friends in Jacksonville to join the band named after it. We wrote some funny songs and played wherever our bass player was living at the time. Sometime after that we moved to Tampa where the line up changed a lot and we actually started playing shows. The rest is history.

What's the message to transmit with your music??
Well, I wouldn't try to look to deep into our songs for a message. Mostly we are in it to have a good time, so the songs are mostly supposed to be fun.

What's your method at the time of writing a song??
That vary's from song to song. Sometimes we all get together as a group and write something like our latest song Albert. Mike P (drummer) had this loose idea for what the song would be about and we just ran with it from there. Other times people come in with a good portion of the song already written which is what our old guitar player Mikey did. Then some songs just sort of happen. I wrote Donkey, for example, driving across Florida in a pick up truck that had a broken radio. Since I didn't have any music I would just sing and I ended up making up Donkey on the way. Back in the day we tried getting really drunk and writing songs but we could never remember them the next day and my handwriting is terrible so we couldn't read anything either. So I guess our methods are all over the place. We just do whatever works to make a song that we are happy with.

What plans do you have for the future??

We are going to keep playing shows and working on new songs eventually recording another album. We are also working on making some new cartoons and music videos. So far we have two cartoons completed and I would like to keep on making them. But our bass player, Josh, is the one who does all the painstaking animation and he keeps insisting he needs breaks for things like sleeping and going to work to support his family. I suspect those are just excuses because he is lazy. So there will be new cartoons, but maybe not as soon as I would like.


Which has been the funniest prank you have been or took part while on tour or after a show??

Not exactly a prank but, at a show our alto sax player Ricky pulled out a chainsaw during our song Super Black Death Cloud (it fits with the song). Almost no one in the band knew he was going to do it and no one in the audience knew. He fired it up and leaped over the barrier between the stage and the audience. It was pandemonium! No one knew what was going on and a lot of people were pretty frightened. It was awesome!


If you were stranded in the middle of nowhere after a show or while on tour. The help is away from where you are, ¿Who would you send to look for help? And if while the rest wait, there's no food and the only way to feed yourself is by eating each other, ¿Who would you eat first?
I think I might be the one to go get help. I am pretty sure that I am the fastest (which may or may not be why they call me Ostrich). If not me then maybe Ben (trumpet). I imagine he is pretty quick too.

As for the cannibalism that is a little more difficult. In our cartoons Ricky (saxophone) is a cannibal, so we might eat him first to stop him from eating us. Then again, if he really is a cannibal it might be best to keep him around to share his recipes. Since there are 10 of us it would make the most sense to eat the larger members first. I suppose we could start with JVV (trombone/tuba) because he is a big guy and eats fairly healthy so he would probably have good meat. But, he also builds canoes, so we would have to wait until he built a couple of those before throwing him in the pot. (Provided of course that we are on an island and not stuck in the desert. Canoes would be pretty useless in the Sahara).

Which country you guys would love to play?
We have always talked about playing Japan which would be cool because I want to climb Mount Fuji anyways. I would also like to play in Canada because there are some pretty awesome punk and ska bands that come out of Canada so I think it would be pretty fun. But we would happily play in any country we could get away with having a show in (provided we could afford to get there).

With which bands you guys would love to share stage??

Fisbone would be my top choice. But, really we are happy to play with anyone who puts on a fun show. Although it is great to play with big name national acts, some of the most fun we have had has been playing with local bands.


Are you OK, with the direction the band is going actually?

I am thrilled with the direction the band is going in. We are playing far bigger shows and getting far more positive attention than I ever imagined when we first started out. I really like everyone in the band and we keep coming up with fun, new, and exciting things to keep the band moving forward. It's going great!