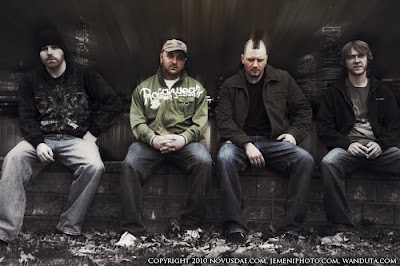 1. What's the meaning behind the band's name?
Tim - The band name is an alpha-symbolic integration of the equations that describe the universe at its most fundamental quantum level. Also, we summoned Jesus through a gateway created by intense levels of chi energy and the appropriate balance of dark matter. He told us the name sounded really cool.
Ryan - It's not really a literal translation, but Tim's definition is pretty close.

2. How the band started??
Thorne - A long, long time ago; before man walked upright and culture was a million years out... a very sexy mud-flipper landed on Pangaea bringing unknown sexually-transmitted diseases with it. And in the early stages of man we were very horny creatures, so our ancestral man (Ricky) decided to have his way with that not-so-innocent mud-flipper! After doing so, he developed a very nasty rash and later died. In later years to come, all of our other ancestral brothers talked about it until they realized that if they would have used saltwater and poured it over the rash, that Ricky could have lived. They called the remedy Novus Dae!!
Ryan - What the f*$k did you just say? Dude, smoke another one. What my friend here is trying to say, is that we started as a group of friends just getting together to jam. Several years later, here we are.
Greg - I like Thorne's historical account better.

3. What's the message to transmit with your music??
Tim - Positive change...both personally and for the rest of the world. Also, using music as an outlet for your thoughts, feelings, and emotions.

4. What's your method at the time of writing a song??
Tim - Our method varies from one person having a full song idea to all of us sitting in the room together, hashing the song out from beginning to end.
Ryan - A lot of the time, Greg sits in the studio to hash-out ideas. Part of his process is smashing stuff and drinking copious amounts of coffee whilst smoking about 14 packs of cigarettes. He knows how good of a song it is by how many cigarettes he has to smoke. I think One Night's Madness was about 26 packs.
Thorne - Get really tanked until we stumble across something we have never heard before! Maybe.

5. What are your music influences??
Tim - Tool, Nirvana, Miles Davis, and other musicians I've heard/performed with.
Ryan - I started liking metal/rock because of Metallica. Then later I got into Tool, System of a Down, Chevelle, etc... But I've been known to listen to anything from Busta Rhymes to Garth Brooks.
Greg - I'm all over the place. Anything from grunge, to punk, to metal, to jazz, to blues.

6. What plans do you guys have for the future??
Tim - Hitting the road in support of Control Yourself while making new friends on the way. Hopefully starting other album come winter.
Thorne - To find more remedies like the one found after Ricky's tragic misfortune.

7. Which has been the funniest prank you guys have been or took part while on tour or after a show??
Tim - Great question! Not really a prank but more a bet. Our bass player was challenged to a McDonald's quarter-pounder eating contest... he hasn't been the same since.
Ryan - Dude, that was worse than a hangover. But there were fries and milk-shakes involved too. Sigh...

8. If you guys were stranded in the middle of nowhere after a show or while on tour. The help is 65 miles away from where you guys are. Who would you guys send to look for help? And if while the rest wait, there's no food and the only way to feed yourself is by eating each other. Who would you eat first?
Tim - I would make the walk after enjoying some grilled Thorne.
Thorne - I guess I would eat myself... while Tim walked! But Tim would get lost, therefor everyone's screwed!

9. Which country you guys would love to play?
Tim - The Netherlands or Croatia.
Ryan - France, Australia. Actually I'd like to just go to Australia period.

10. With which bands you guys would love to share stage??
Tim - Tool! But more realistically, Sevendust, Deftones or Protest the Hero.
Greg - Fantomas, Mr. Bungle, Killswitch Engage, Tool among others.

11. Are you guys OK, with the direction the band is going actually?
Tim - Yes...we set some goals at the beginning of the year and many have come to fruition!
Ryan - We're working on things pretty hard right now. Making things happen. Trying to stay positive. Let's do it!

Check out more from this band by going to: http://www.myspace.com/novusdae
Publicado por Vents en 14:06