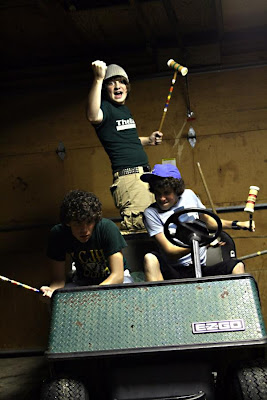 Where the band's name came from? We had a great time at our high school homecomings boogieing with our friends and come to think of it, we also enjoy boogieing during our show with the audience!

How the band started?? It started as with Aidan messing with some sounds on his computer on Thanksgiving and has turned into something a lot more meaningful and complex for all of us. It's funny to hear the old music and hear how far we've progressed.

What's the message to transmit with your music?? First and foremost we try to transmit happiness and joy that we've found in our Savior. We're happy and very blessed people with a lot of fun to spread.

What's your method at the time of writing a song??Aidan primarily comes up with a melody, chord progression, idea, really anything and starts to build a song. We all then jam with it and either strengthen the music with our instruments or we end up forming our own ideas into the blend.

Which is your music influences??In the beginning I'd say we loved the electronic pop sound of Hellogoodbye, then we really liked the large sound of bands like U2 or Angels and Airwaves but anymore, we've become very eclectic and really enjoy stuff that’s on the radio like Jay-Z or Katy Perry, indie bands like Tokyo Police Club or Steel Train, to pretty much anything. One band I think we all really have always enjoyed is Relient K, and being from the same area we can only hope to achieve the success and songwriting ability they have.

What plans do you have for the future?? We all hope to be successful in our music, and by that we hope to foremost change lives and lift people up. To be able to do that for a living would truly be a dream for all of us.

Which has been the funniest prank you have been or took part while on tour or after a show?? Sad to say, but we haven't really gotten into a whole lot of shenanigans as a band, but one prank we thought would be funny to pull to our guitarist, Bucket who used to be in the band, was to put vinegar in his water while on stage. We could only imagine the face he would make after getting a mouthful Haha!

If you were stranded in the middle of nowhere after a show or while on tour. The help is 100 miles away from where you are, ¿Who would you send to look for help? And if while the rest wait, there's no food and the only way to feed yourself is by eating each other, ¿Who would you eat first? I think if anyone would be sent out to look it would be me, being the more responsible one and because I wouldn't want to stay around and hear Aidan whine. I think Aidan would be eaten first because Eli could easily overtake him with his high school wrestling skills but really, I feel like Eli's such a humble and giving person he might offer himself to Aidan. That last scenario could easily go either way.

Which country you guys would love to play? Japan! Looks like such an interesting place to visit and from what we've seen, the people go crazy at concerts!

With which bands you guys would love to share stage??Hmm... Probably Relient K. It would be such an honor to be able to play in front of their fans and be able to say we played with a band that really shaped our musical tastes.

Are you OK, with the direction the band is going actually? Absolutely, to be honest I think we're the most excited now than we ever have. I think we've been extremely blessed along the way and I can't wait to see what will happen next with our new free EP we'll be putting out!

Check them out by going to: http://www.myspace.com/thehomecomingmenu
Publicado por Vents en 8:43