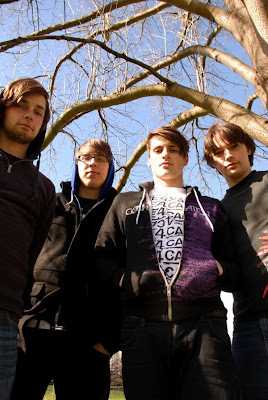 Where the band's name come from?
I (Bronson) came up with the name because I’m a huge superman fan/ hero fan in general. I pitched it to the guys and they hated it at first. I kept bringing it up every chance I got because I loved it so much and it ended up growing on them. So I won! Haha

How did you guys begin?? Me and my brother Blaine have been in a lot of crappy bands that didn't really go very much farther then the garage. Me, Blaine and our drummer at the time Colby have been friends for a long time and Colby worked with Chris. Blaine Colby and I wanted to start a band and we needed a guitarist so Colby suggested Chris. We’ve been best friends ever since. Colby ended up leaving the band and now we have Spencer as our drummer and Ashton as our second guitarist

What's the message to transmit with your music??
We take performing music seriously because this is what we want to do in life. but we don't take ourselves very seriously so the message of each song varies quite a bit from serious songs to joke songs. But overall we like to portray that we are best friends playing the music we love to play.

What's your method at the time of writing a song??
It generally starts with Chris something written on guitar and then we all work around that changing it or adding to it. We all work together in song writing. It helps us get along that way :P

Which is your music influences??
We all love pop punk that's why we play it. But we don't just take influence from that. its mainly bands like blink 182 or newfound glory but we all love bands like foo fighters or mumford and sons

What plans do you have for the future??
Our goal right now is to push the album we just released as hard as we can. Get our names out there to labels and to people by touring and sending out press kits.

Which has been the funniest prank you have been or took part while on tour or after a show??
We do a lot of dumb things to each other but the funniest story I have about tour isn't really a prank. Our drummer at the time Colby was taking care of our money box. We had just finished our last show of the tour and started heading home. When we asked him where it was he had no idea. We were all freaking out because it obviously had the money we needed to get home. So we pulled over and he tried to figure out where he put it. it turns out he had set it on top of a van that belonged to the other band we were touring with before we had separated. Luckily it was still on top of their van when we called them even after they had driven a long ways.

If you were stranded in the middle of nowhere after a show or while on tour. The help is 100 miles away from where you are, ¿Who would you send to look for help? And if while the rest wait, there's no food and the only way to feed yourself is by eating each other, ¿Who would you eat first?
Haha I don't think we would be able to separate but if I had to I would probably send Blaine so that he would be safe from the cannibalism Hehehe. And I would sacrifice myself so that the other guys could eat. I couldn't eat another person Haha

Which country you guys would love to play?
We would honestly love to play anywhere and everywhere. We are based out of Canada but it would be really awesome to see how different the music scene is in other countries

With which bands you guys would love to share stage??
I would give anything to open up for blink 182. They were (and still are) my favorite band growing up. They are the reason me and my brother wanted to play music. Same with Chris. We are all avid blink fans

Are you OK, with the direction the band is going actually?
After releasing our second full length i really do love where this band is going. We have progressed so much since our first record and i feel we are only progressing more. I can’t wait to work our asses of to get our name out to every single person.

Check out more from OCH by going to: http://www.myspace.com/oncallheroes
Publicado por Vents en 9:11