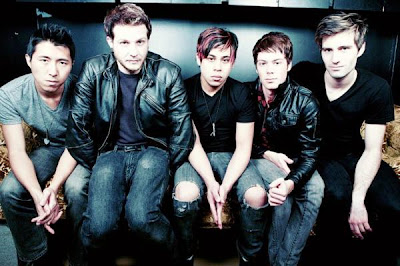 
What's the meaning behind the band's name? - A girl in high school was wearing too much hairspray and over the candle lit dinner we had some of her weave caught on fire. The name came up after reminiscing about the event.

How the band started??
- It started off by Nick, Harry and Austin working at a well known retail store where they met. On new years of 2007 a bet/new year’s resolution was made between Austin and some friends from the scene to start a band and see where it goes. Nick & Harry had already talked about jamming and playing some music to Austin, but if a band was to be started it was going to be done the right way. Soon after first playing together Brent was brought in, as he is \a childhood friend of Nick and Harry. Four months after that while recording their first demo Josh came in to rock the bass.

What's the message to transmit with your music??
- when we write music we don't plan on putting a message behind it or anything, if it's ends up there it ends up there. Some of it could be; always look on the bright side of things; there is a light at the end of the tunnel; you're not alone. It's all mostly life experiences brought to a musical aspect for healing and therapy

What's your method at the time of writing a song??
- Any idea that pops up writes it down and let’s makes a song. Our method is madness.

Which is your music influences??
- Life, death, heartache, happiness, parties, tour. As for the musical part there are too much to name.

What plans do you guys have for the future??
- Tour the world for the rest of our lives and never come home.

Which has been the funniest prank you guys have been or took part while on tour or after a show??
- We don't do too many pranks on tour just because we just drive, kick it, play shows and party after that... But Austin did go over a speed bump at Warped Tour pretty quick while Nick and Josh were asleep in the trailer. You could hear Nick hit his head on the top of the trailer.

If you guys were stranded in the middle of nowhere after a show or while on tour. The help is 65 miles away from where you guys are, ¿Who would you guys send to look for help? And if while the rest wait, there's no food and the only way to feed yourself is by eating each other, ¿Who would you eat first?
- We would send Bob Saget to get help (assuming he somehow got on the tour with us), and have you seen "The Book of Eli"? Those people get shaky and gross as hell! No way we will ever eat someone, I know I'd rather die!

Which country you guys would love to play?
- Anywhere outside of the U.S would be awesome

With which bands you guys would love to share stage??
- Linkin Park, The Used, Buckcherry, & Eminem

Are you guys OK, with the direction the band is going actually?
- Of course, we have a system that works and we all want to be able to live our lives playing music, without having normal jobs. We've tried a lot of different styles in the rock realm but we now feel really good with what we've been writing for the last year or so. We write a lot and whether a song makes the cut or not, it's something that we can do together as a group of friends that loves to write, record, play and tour, and that's all we want to do with our lives.

Check out more of this band by going to: http://www.myspace.com/girlonfiremusic