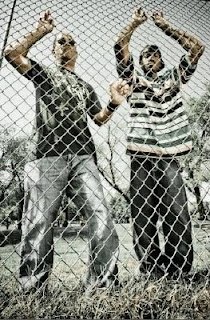 Where the band's name came from? From God back in 2003, I prayed for a name of the group after putting together a CD of Christian songs titled "Believe". Then "GAS" first came to mind, which I thought was funny until the Lord let me know what it meant, which is "God's Anointed Soldiers".

Holy hip hop group, God's Anointed Soldiers was formed in 2003 by CEO & founder of Hundredfold Productions, David Gordon (a.k.a King Dave) after receiving a revelation from God about the music ministry, ties in with the same way we got our groups name, but the whole reason we were putting that CD "Believe" together was because we received an e-mail from a Christian Radio station in Australia, thus G.A.S. was formed.

What's the message to transmit with your music?? The world system offers many alternatives to abundant life, but we talk about the only "Alternative", which is Jesus the Christ who gives Life Abundantly.

What's your method at the time of writing a song?? Usually we wait on the Holy Spirit to bring up a topic or issue to address and then we meditate or study on it and allow the lyrics to flow!

Which is your music influences?? Growing up, all the Old School music and rap, but lately, Crossmovement, Lecrae, Flame, Tripp Lee, Da Truth, Stephen the Levite

What plans do you have for the future?? To be in a position to do this music ministry on a daily basis where it's providing for my family and the ministry.

Which has been the funniest prank you have been or took part while on tour or after a show?? Once when we were ministering at this boys detention center, one of the speakers was giving his testimony about how one day he broke into a church before he was saved and how God brought he back to that Church after he was saved to give his testimony, which made me think about a time when I was young and broke into a church and took some boy scout knifes, anyway after we left there we had another ministry event at this church in my old nieghborhood, I didn't recognized the address, but when we pulled up to ther church, I realized it was the same church I broke into when I was a kid, I was like "Lord You got to be kidding me", needless to say, I ended up giving my testimony. It wasn't really a prank, but it's really cool how real God is when He deals with us!

If you were stranded in the middle of nowhere after a show or while on tour. The help is away from where you are, ¿Who would you send to look for help? And if while the rest wait, there's no food and the only way to feed yourself is by eating each other, ¿Who would you eat first?

King Dave would go get help and we would eat Eugene(Big E) first because he's the youngest!

Which country you guys would love to play? China

Are you OK, with the direction the band is going actually? Yes, we finally matured into a Music Ministry!!

Check out more from G.A.S. by going to: http://www.myspace.com/gas
Publicado por Vents en 20:35