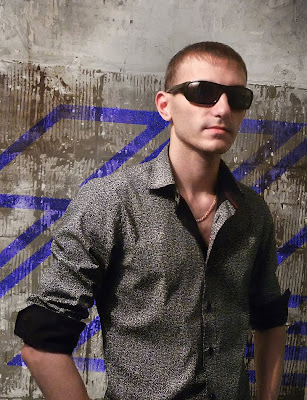 How the band started??
L-GREECO: I was 15 years old at the time I lived in Greece. I lay on the couch with eyes closed, thinking about life. And then I realized that music is my life. A few months later I returned to Russia and began to write music. At first it was a "salad" from different not fully compatible sounds. But eventually I began to understand what music is and how "to cook it". My name is Alex, and the short name sounds like Lex. I'm Greek. That's how my nickname came: L-GREECO.

What's the message to transmit with your music??
L-GREECO: As I always say, my music is an expression of myself. My music is my understanding of life expressed by the sound.

What's your method at the time of writing a song??
L-GREECO: You know, I have absolutely no methods! I just wake up, wash, eat, walk, and work ... Whatever I do in my head always played music. And I do not know how this music gets into my head. It comes out of nowhere. In such moments, I turn on the recorder on my cell phone and just sing, I make different sounds with my voice. At the moment I have over 500 different musical sketches. And when I come home I turn on my PC, load the program and GO!

Which is your music influences??
L-GREECO: And again as I always say, I can't say that I have been influenced by musicians or groups. I like the different styles of music from techno, electro, house, ambient to punk, metal, rock, new age and classic. I like a lot of different musicians, such as The Prodigy, The Crystal Method, Korn, Rammstein, Fluke, Stone Lions, Thomas Newman, Edward Shearmur, Carter Burwell, Boards of Canada, Jesper Kyd, U.N.K.L.E, Kraftwerk. Maybe my music is similar to other musicians in something. But it's not because I wanted to be like them or better than them. I think it's because I felt the same sense that they are; Because I saw the same that they had seen; Because I was thinking the same thing about what they thought; and because I expressed my feelings in my music the same way as other musicians expressed their feelings. I do only what I feel. If I feel joy, I play joyful music. If I feel anger, I play anger. If I feel calm, I play calm. If I feel love, I love play love: All honest. No lie. I don't try to be someone else. I'm just trying to be myself.

What plans do you have for the future??
L-GREECO: I do not have any plans at all. I was disappointed in the planning. As shown by my life experience: do not plan, live as if every day the last day. There is only what I WANT and what I DO NOT. I want to continue to write music. I want to finish my fifth album on which I have been working for five years. I want to get my music heard more people. I want my music touches more people.
There are still many things that I want, but they are too intimate :)

Which has been the funniest prank you have been or took part while on tour or after a show??
L-GREECO: I have no answer to this question.

If you were stranded in the middle of nowhere after a show or while on tour. The help is 100 miles away from where you are, who would you send to look for help? And if while the rest wait, there's no food and the only way to feed yourself is by eating each other, who would you eat first?
L-GREECO: I would eat myself :) Because nobody else :)

which country you guys would love to play?
L-GREECO: I would really like to play in London. London is cool! And I want to play in New York. New York is cool too! I have never been in London and New York+ But I'm sure it's cool! :)

With which bands you guys would love to share stage??
L-GREECO: Very simple question ... And at the same time very complicated ... For me it would be an honor to play with any musician, who sincerely believes in what he does. And of course for me it is important to understand and accept what makes the musician. There are many international celebrities whose work I just enrage! And also there are little-known musicians that I admire.