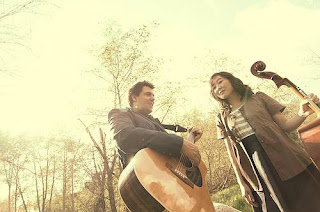 How did you guys get started with all this??
Heartbreak. Writing songs was the refuge for aaron in the midst of a broken relationship. Sometimes emotional pain is so deep you have no other outlet except music. During this time, aaron was looking for a musical partner and was introduced to jane as a classical musician through a mutual friend.  During our first meeting, we played music for a couple hours and immediately hit it off.  The music blended beautifully, playing together just felt so comfortable, and we decided to play again a week later.  We were divinely given opportunities to perform live and began to seriously invest in our music as a duo about two months after we first met.

What's the message to transmit with your music??
Our music is really just about life.  Experiences in everybody's life, though different in detail, really connects us to one another through the sorrows, struggles, and joys we feel universally.  Music somehow unites people through the expression of these emotions.  We also understand that life is rough.  Music and the arts give people an opportunity to "escape" or renew a sense of their purpose and grasp the beauty in life.  We want our music to be able to touch people in this way.

What's your method at the time of writing a song??
Aaron is the primary songwriter in our duo.  There really is no method to his madness.  He is the epitome of "create when you're inspired." He will wake up in the morning and just come up with a song.  While he is just creating, Jane is able to fill in and add a little more depth to the music once she hears the skeleton of the song.  It's hard to describe to someone how you just hear or feel something.  There's no magic or method to it.  We just ... do it!

What plans do you guys have for the future??
We have both experienced the reality that life doesn't always turn out the way you plan.  We have our goals obviously, but we are just thankful to have found our music together and really give thanks to God that we have come as far as we have in such a short time.  Our plans mainly revolve around further publicizing who we are to the world. We want to record more albums and possibly collaborate with other musicians.
What has been the funniest prank you have been or took part while on tour or after a show??
This prank is not really funny, but it is probably funny to the people who committed this crime.  We were doing a show and had brought Jane's cello and two guitars.  For whatever reason, we decided to leave one guitar in the car and just use one guitar.  When we went back to our car after the show, someone had busted the window of Aaron's car and Jane's beautiful Martin DM was stolen!  Now, whenever we go eat after a show we bring all of our instruments inside with us.  We're just joking.  But we definitely won't go anywhere afterward unless we can park the car where we can actually see it from the restaurant.

If you were stranded in the middle of nowhere after a show or while on tour. The help is 65 miles away from where you and your band (If any) are, Who would you send to look for help? And if while the rest wait, there's no food and the only way to feed yourself is by eating each other, Who would you eat first?
We decided that we would send Aaron.  First of all, because Jane is pretty frail she is prone to fainting.  Aaron is sturdy and probably able to walk the 65 miles.  Second, Jane is deathly afraid of many things including strangers and the dark.  She probably wouldn't make it one mile. Jane also adamantly says that she should eat Aaron first until help comes along.  Being the kind man Aaron is, he humbly agrees.

Which country you would love to play?
South Korea, since that is where Jane was born.

With which bands you would love to share stage??
Bono, if you're reading this, give us a call.  Jay-Z, Eminem, Taylor Swift, Dudamel, our musical influences we listed earlier and many more.  Performing music with other great musicians is not limited to any genre - we would find it exciting to collaborate with all different bands and solo artists.

Are you OK, with the direction the band is going actually?
We are very happy with the direction we are going!  We have had numerous opportunities to perform and we are extremely blessed. In this field, there are many things outside of your control.  We want to know that in the areas where we do have control, we have given it our best.
Check out more: http://www.myspace.com/aaronandjane
Publicado por Vents en 6:01