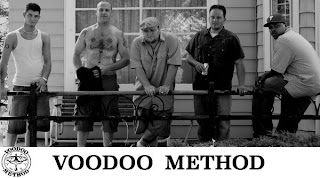 What's the meaning behind the band's name?
We came up with Voodoo because there's something spiritual and organic about the way we all gel together musically.  It also seemed fitting because our live show is very much a ritual.  What most people get from church or religion, we get from playing music.

How the band started??
Dustin, Scott, and Dale have played together on and off for years.  Abram and Dale met through a mutual friend, jammed together once, and were impressed with how well they played together.  So then we had the band, but no singer.  Peedi and Dale worked together and Peedi URGED Dale to let him try out.  Afterwards, Dale URGED Peedi to become a permanent member of the band.

What's the message to transmit with your music??
Fun.  Life.  Love.  Celebration.  Boats and ho's.

What's your method at the time of writing a song??
Somebody shows up with an idea, and we jam on it.  We figure out what works with what everyone is throwing in, and it develops from there.

What plans do you guys have for the future??
Boats and Ho's.
No seriously.  Our plans are to be a force in music.  And at the same time, bring fun back to music.  Not everything has to be as serious as heartache and pain.  Music can be happy.  Fun, Life, Love, Celebration.

If you guys were stranded in the middle of nowhere after a show or while on tour. The help is 65 miles away from where you guys are, ¿Who would you guys send to look for help? And if while the rest wait, there's no food and the only way to feed yourself is by eating each other, ¿Who would you eat first?
We'd send Scott for help.  We're pretty sure he'd taste horrible.  Plus he could probably take a stick, some leaves, and a few rocks and make a vehicle and fly to safety.  We'd eat Peedi.  He's meaty.  We could feast on "Fanny" (what we affectionately call his ass) for days.

Which country you guys would love to play?
Anywhere there's language barrier and we're completely out of our element.  The music would have to stand on its own.

With which bands you guys would love to share stage??
Peedi-Aerosmith, Scott-Primus, Dustin-Red Hot Chili Peppers, Dale-Queens of the Stoneage, Abram-any act Dave Grohl has had anything to do with.  Oh, and The Pixies.

Are you guys OK, with the direction the band is going actually?
We're happier'n a puppy wit tew peters.  Yes.