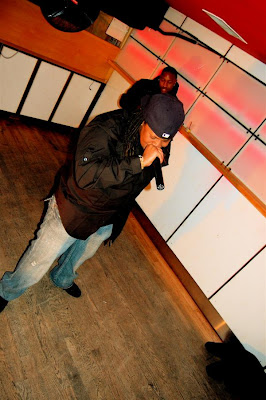 What's the meaning behind your name?
Around 15, a friend gave me the nickname “A”, short for April.  There was one problem.  Whenever she yelled out “A”, about 15 more people would answer.  Quite confusing!  So, I started referring to myself as Ace to separate myself from the rest of the A’s.  Reign came about much later.  As I got older, it became my aspiration to be someone that people will remember.  Regardless if a president is the worst ever or the greatest we ever had, people will remember the impact, the legacy he leaves behind.  I want my "reign", my legacy as an artist to be remembered as a positive influence and my music timeless.
How did you get started with all this?
I’ve been writing music since I was a child.  As long as I can remember, I love writing poetry.  One day after listening to Queen Latifah, MC Lyte and Trina, I decided to try rapping my poems, but they were too soft.  Those artists were not rapping about love, which my poem reflected, but their life, respect for women and life on the streets.  After studying Queen Latifah’s song, “U.N.I.T.Y” and the vocals of MC Lyte, at age 12, I created my first piece, entitled “Raw”.  I knew then I had stumbled onto something.
I become more serious about my artistry about 23, around 2007, when I met Robert “Rob” Stern.  At the time, Rob and I worked together at this restaurant.  He overheard me freestyling to one of my co-workers.  I guess he liked what he heard.  He told me he was DJ back in his hometown Ohio and wanted to make me a beat.  I was like, alright.  The next day he dragged me into his car.  I was a little nervous because I didn’t really know this dude, but after I heard his beat, I was liked, “Dude, this is hot.”  The rest is history.  For a while, we recorded and produced some projects together in our home studio.  Rob is doing his own thing and I’m doing mine, but we hook up to make music whenever our schedules allow it.
What's the message to transmit with your music?
Life, life, life.  It is important to me that my music is realistic and relatable.  I want my listeners to see the value in being yourself, following your dreams, and let negative situations be the motivation to do positive things. When people listen to my music, I want it to inspire them to write if they’re a writer, to draw if they’re an artist and to smile if they’re frowning. I want my music to be the motivation for people to uplift themselves and improve their situation.
What's your method at the time of writing a song?
Going into my studio, closing the door, and listening to one of my favorite songs with my earphones blasting.  Then, I put on my favorite instrumental and begin to write.  Sometimes I know what I want to write about and other times my pen just moves to express my thoughts.  The end results are songs like “Crazy” and “Look Beyond the Surface”.
Who are your music influences?
My musical influences are artists like Tupac, Biggie, Queen Latifah, Mc Lyte, and Nas, just to name a few.