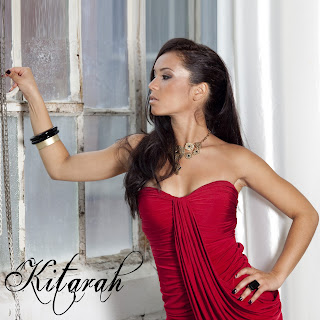 How did you get started with all this??
I began playing the piano at age 8 and that was when I also learned I could sing. My teacher held piano recitals annually at Berklee College of Music in Boston, Massachusetts. I played and sang songs such as Mariah Carey’s “Hero,” and Celine Dion’s “Titanic.” From there I never stopped singing.  I sang in church, at big events in my schools, weddings, and also in plays and musicals. Then once I reached my teen years, I began writing my own songs and performing them at clubs in the Boston area. And now I am the first female artist signed to Kutroc Records.
What's the message to transmit with your music??
Life is a road of many surprises, some are good and others bad, but you have to keep your head up no matter what and always believe in yourself. Life is too short so enjoy every moment; It’s okay to love, laugh, cry, win or lose, dream and make mistakes. Throughout my lifetime I have experienced every piece of that message and so have people around me, so to get all those experiences and turn them into songs that I can relate to along with many people in the world is something that is very important and great to me.


What's your method at the time of writting a song??
Writing songs is one of the best parts of the business. After creating a beat with the producer, I listen to  it a couple of times and let everything sink in, allowing my mind, body, and soul to feel it and become one with it. Then ideas keep flowing through my mind and I begin to write about whatever I feel the song should be about. It could be about a past experience or even something I’m experiencing at the moment. It all depends on the vibe I get while listening to the beat.

Who are your music influences??
My biggest music influences are artists such as Mariah Carey, Whitney Houston, Michael Jackson, Celine Dion, Christina Aguilera, Beyonce, Usher, Ne-Yo, and Alicia Keys. These artists and their music influenced me greatly to become the artist I’ve always wanted to be.

What plans do you have for the future??
I plan to write and sing songs not only in English but also in Spanish and Portuguese. There are so many Latin singers out there who sing in Spanish and English, but we don’t have a Brazilian Latina singer who does all three and that’s me! I also want set up my own charity organizations and travel around the world not only on tours but also to help people in need. I also have a lot of experience with acting so I would love the opportunity to show my acting skills in a couple of movies.
What has been the funniest prank you have been or took part while on tour or after a show??
I haven’t had any pranks happen to me while on tour… well at least not yet lol! But the CEO of the label always does a great job in scaring us all at the studio! Many times we are there till 2-3 in the morning and he always finds a way to scare us. One night I was outside talking to the producer and the male artist after one of my sessions, and all of a sudden he came up from behind us in a black hoodie and scared us to death thinking we were about to get attacked by a stranger haha. We have yet to get him back so maybe I’ll scare him in a different way and pretend that I lost my voice on the day of a big performance, hmm… perhaps the Grammy’s ?

If you were stranded in the middle of nowhere after a show or while on tour. The help is 65 miles away from where you and your band (If any) are, ¿Who would you send to look for help? And if while the rest wait, there's no food and the only way to feed yourself is by eating each other, ¿Who would you eat first?
Wow! It’s a good thing I’m a solo artist or else I’d eat everyone in my band including the one I’d send for help because I cannot go hours without eating!

What country you would love to play?
I would love to travel all around the world to perform for all my fans but I’d absolutely love to perform in Brazil. When I was 17 I received an award for bringing music to the Brazilian community here in Boston so to bring my music to the country itself would be even more rewarding. My parents are also Brazilian, so to sing in the country where my family came from would be an honor and of course, very fun and exciting.

Are you OK, with the direction you're going now?
I am very happy and proud with the direction I am taking musically. I’m really focused on building that strong connection with my fans and show them who Kitarah really is and what I have to offer to them. Everything has its time and I’ve been working very hard and have dedicated myself to be the best that I can be. This is a dream that has been in my heart for a VERY long time and to finally have the opportunity to share with the world my passion for music is an amazing feeling!