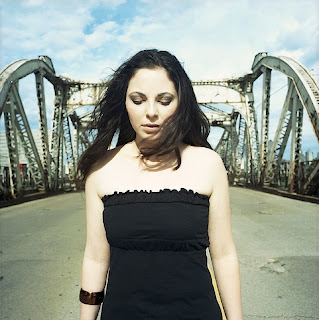 How did you get started with all this?
I started singing at the age of 3 and was professional by 8 years old. I sang with the Elgin Childrens Chorus for many years, which brought me all around the world and introduced me to the world of international music. I started seriously pursuing celtic/world music at sixteen years old, and I received my degree in music performance in May 2006 from the University of Illinois at Chicago. After that, I toured Europe and the United Kingdom for a few years, which inspired a lot of the material that I write. Over the past few years I have been writing, producing, recording, and traveling like mad. It's been great.

What's the message to transmit with your music??
The message simply, is to find strength and peace within. To know the world around you and your place in it. None of my songs are about dancing at nightclubs or falling in love under a willow tree. I hope my music uplifts the spirit and illuminates what is right within each of us.

What's your method at the time of writting a song??
I have many methods for writing. I suppose, it depends upon the piece. Sometimes, I will start with a melody in my head that comes to me while driving in the car or hiking or something. I'll then go to the piano and work a basic chord structure around it. Once I'm pleased with the music, I'll start developing lyrics. Or, I might set some poetry.

Lately, I've been going to the piano, just intending to play around and coming up with full length songs. I'll find a chord progression that really speaks to me, and will play it over and over again until a melody comes to mind. From that melody I will form a basic chorus or refrain. Then, I'll start to work on verse sections, bridges, maybe some key changes, etc. Sometimes, the lyrics come simultaneously with the music or I'll have the lyrics finished after a day or two. On certain days I can write 4 songs in one afternoon, some I can write only one song minus the lyrics. It really depends on the day. Some days are more creative than others.


Which is your music influences??
I have many influences. If I had to narrow it down, I would start with Lisa Gerrard, Peter Gabriel, Sting, U2, Moya Brennan, Clannad, Afro-Celt Soundsystem, Ladysmith Black Mambazo, Deep Forrest, and Nakai.

What plans do you guys have for the future??
Well, I'm working on some really exciting projects this year. The most exciting of them being my new partnership with Irish singer Liz Madden of Dublin. She has relocated to the U.S. and we have formed a powerful duo called Shishonnah, which all tracks, web stuff, and EPK materials will be up in November. Through my record label and her production company Glencoe Records/Healing Sun Productions, we will be releasing a full length Shishonnah album in the new year. We are working on many performances in and outside of the United States, Europe, and The United Kingdom in the Spring and Summer of 2011. We are in talks to form our own radio podcast show and numerous television, documentary, and theatrical projects to follow. I think we're booked through 2013. We're very busy! Lol.

Which has been the greatest day in the band?
For me, it was the day that launched my solo career and the day that I first met Liz. I was asked to perform at the Chant Du Femmes concert in Lorient France, which takes place at the famous Lorient Interceltique Festival. I was the only American musician out of nearly 5,000 musicians asked to perform at the festival. I had just graduated from college, and knew how big of a deal this was to be invited, so I was a little nervous. I remember the sound check, walking into the dressing room and seeing a beautiful green gown hanging up above one of the mirrors. I hadn't been told who else was on the program with me, but knew there was a group from Ireland. As I was putting my stuff down, I heard music coming through the speakers in the dressing room. It was the music of Rua, which I was a fan of. I couldn't believe that I was on the same program as them. I was taken to the stage to meet them, and that's where I first met Liz and her former partner Gloria Mulhall. That night was one of the best performances of my life and I was so proud to share the stage with so many talented women from all over the world.

Which has been the funniest prank you guys have been or took part while on tour or after a show??
Oh, man. Well, I don't know if this qualifies as a prank or not, but both my translator and my driver left me in France with a group of wild Scottish musicians and I had to walk home six miles to my hotel, completely intoxicated! It was great craic! As we say in the U.K. and Ireland.

If you guys were stranded in the middle of nowhere after a show or while on tour. The help is 65 miles away from where you guys are, ¿Who would you guys send to look for help?
The person to send for help would definitely be Liz's husband Brian. He's tall and tough and would probably make it to help while fighting off wolves or worse-the townspeople! He'd come back in one piece too, probably while riding a tank. We're all safe if Brian's around.

And if while the rest wait, there's no food and the only way to feed yourself is by eating each other, ¿Who would you eat first?
Oooh, I think I'd have to become a vegetarian in that case. The lads in the backup band are all pretty skronny and can run pretty fast. It would be a waste of energy I think, lol. I'd probably consider boiling shoe leather or something for protein. If we're close to the woods or something, might go hunting even.

What are your hobbies?
When I can, I love horse back riding, kickboxing, hiking, and going to choral concerts.

Which country you guys would love to play?
I would love to go to Australia. I haven't been there yet and I have plenty of Aussie friends.

With which bands you guys would love to share stage??
Peter Gabriel, Sting, and U2!

Are you guys OK, with the direction the band is going actually?
Absolutely. I can't remember a time when I've felt more at peace and fulfilled.