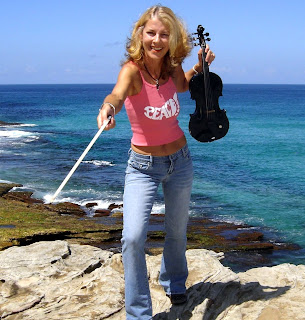 I used to sing 3 part harmonies with my 2 sisters when we were just tiny girls. And when I was 10 my parents finally gave in and bought me my first violin. I had a classical training in music and was a founding member of the Canberra Youth Orchestra, but always I wanted to play music with a groove. After many years in bands and working as a session violinist & vocalist, I decided it was time to write and record my solo debut album 2 Think. And now 2 Think is happily spreading it's message of peace, love, & harmony, all over the world. Right now, my song "Special" is at No.1 in the Japanese indie music portal Musictrax http://musictrax.jp/index.php?t=jr_charts

Who are your music influences??
Stevie Wonder, Michael Jackson, Grace Jones, Beyonce, JS Bach, Tango, and the list goes on and on. Love it all!

What plans do you have for the future??
I plan to record my 2nd album in 2011 and tour the US.

What has been the funniest prank you have been or took part while on tour or after a show??
Well I haven't been part of any prank as such, but the funniest gig I ever did (only funny after the event!) would probably be when I was having to dodge raindrops that were bouncing off my nose, and threatening to blow up my electric violin below. I was playing at a huge party under a huge marquee on Sydney Harbour here in Australia, and despite it being a brilliant marquee (tent), no fabric could have withstood the force of the torrential downpour that occurred that night. I reckon that that amount of rain would have seeped through marble!

If you were stranded in the middle of nowhere after a show or while on tour. The help is 65 miles away from where you and your band (If any) are, ¿Who would you send to look for help? And if while the rest wait, there's no food and the only way to feed yourself is by eating each other, ¿Who would you eat first?
I'd send the manager (if we had one!) to look for help, and if we came close to starvation while waiting, I guess we'd make a pact not to eat each other, but to wait for all the nourishment that Heaven has to offer. That way, we could still be a band in Heaven :)

What country you would love to play?
Latin America, USA, Europe

With what bands you would love to share stage??
Beyonce, Shakira, Deep Dish, Coldplay, REM, Missy Elliott, Stevie Wonder and the list goes on and on

Are you OK, with the direction you're going now?
I'm very happy with all that's happened with my 2 Think album so far. It's great to have had so many good reviews; to have had tracks included on so many good compilations as well as programmed in some wonderful podcasts. And to have my song "Special" make it to the No.1 spot on Musictrax Japan, as well as voted into the Top 20 Australian songs poll http://www.theaustralian.com.au/news/features/top-of-the-pops-19882008/story-e6frg8h6-1111117529727 is just the best news for an independent artist.
I really look forward to making a sizzling hot video to accompany my next single. Just got to get the budget!
It's definitely no picnic here in indie land, but what joy to be able to market your own music through the world wide web! THANKYOU VENTS MAGAZINE!!!