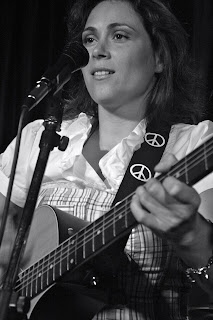 What's the meaning behind the band's name?
Jenikz is the nick name of the lead singer and songwriter, which was given to her in high school because of the popularity of the name Jennifer. Once there was 5 Jennifer's in one class and two with the same Initial last name "R" one student shouted out to her, hey that's ok you'll be JEN X and so that's where it originated and stuck with her from then on. She is a solo artist and songwriter with a killer band. She spells Jen x now J-E-N-I-K-Z cause Jen, for her name; her immediate family calls her Jeni like "jenny." K in numerology is the letter that corresponds to her day force number 11 (if you follow the alphabet A=1, B=2, C=3 ect.) and Z cause she is really into OM and cursively likes to write out Z to kinda resemble the OM symbol... mouth full or what!!!

How did you get started with all this??
Jen has always been the driving force in making her musical dreams come true. She has always been singing and songwriting from the age of 5 and knew she needed an awesome band to complete the magic on stage. She first found Larry Steel, who is a very well known in her local community as a fantastic guitar player, then both were on the hunt for the others auditioning quite a few and jamming with many to find the right fit, then Mac Hunter on bass was found, having a music store near by and just graduating from school he was looking for a band. He liked the message and the mission of the music, he brought along his drum counterpart Sarah Becker whom they have known each other since age 6 or something crazy like that. Then came along Dave Hollingshead on keys who was a music teacher next door to Mac's store... small world but I'm sure it was fate that put us all together!

What's the message to transmit with your music??
The message is simple, to awake to the divinity of who we truly are, and to unite humanity to not only be the best that we could be, but to consciously create a world that has a unified goal to increase the quality of life for all living things. Life is precious and mother earth could really use us to wake up from our bad habits right about... yesterday!!!

What's your method at the time of writing a song??
Sometimes a melody just shoots in the mind, or a phrase that really strikes a chord and won't go away... then its about recording it asap raw just so it doesn't disappear back into the ether. So recording it into an answering machine or garage band what ever is available, then the fun comes in, picking up an instrument and matching the feelings of what it is you mean with the colour of chords, and writing down in the simplest way what it is you need to express, then having fun jamming it out with different ideas and eventually a hook comes that you feel is right and it all comes together. When I am impressed I keep at it, if I am blown away I know its done!

What plans do you guys have for the future??
We have a tour planned that not only do we want to play festivals and clubs but to get into schools, the album also has a series of monologues that makes our concert have a theatrical twist, we want to inspire the world to its inevitable green revolution.

Which has been the greatest day in the band?
Well this summer we had 3 shows in 3 different cities and we knew it was gonna be a challenge but we decided to have fun with it, we got up early warmed up drove to the 1st show, kicked butt, sold cd's, had a bit to eat and went straight to the next show, which had more people more excitement, had an amazing show got to talk to a lot of fans, then headed off the the last show and had another great show, which was like a 3rd wind... the day just got better and better and there was no sign of tired, it was more like wired!!!

What has been the funniest prank you guys have been or took part while on tour or after a show??
Well, I would tell you but its way too embarrassing, I never know what these guys are up to, its always joking, in fact I can't think of a time when they're serious!!!

If you guys were stranded in the middle of nowhere after a show or while on tour. The help is 65 miles away from where you guys are, ¿Who would you guys send to look for help? And if while the rest wait, there's no food and the only way to feed yourself is by eating each other, ¿Who would you eat first?
Well, we'd probably send Larry for help, he's the oldest and has all the gadgets and answers, then if worst came to worse we'd eat Dave, he's the kindest and wouldn't mind, plus he's got more meat on him than Mac ;)

What are your hobbies?
We're concert goers, love yoga, a good flick, messing around with the latest equipment, we gotta throw Sushi in there, golf for sure, and as always music is always on!!!

What country you guys would love to play?
IRELAND!!!... hey maybe we got a shot at it this INDIE WEEK Toronto 2010 HA!!!

With what bands you guys would love to share stage??
Definitely the influences mentioned above, and so many others but Porcupine Tree, Air, Keane, Gorillaz, Metric, Cold Play, there are too many to mention, like I said you got a few hours... maybe days?

Are you guys OK, with the direction the band is going actually? Oh yeah, things are heating up, and were totally excited, everyday its getting better and better, we have to thank the fans for that.