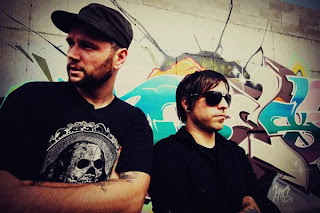 1. What's the meaning behind the band's name?  It has a sort of double meaning.
- Alex Argot (Main Lyricist) + Rich Courage a.k.a. Defpotec (Programmer, Engineer, Laptop Tech, Guitarist, Vocalist) = Argotec
- It can also be likened to "The Technology of Slang" or "Slang Technology" seeing as how the word Argot is defined as: a specialized language of an underground culture.


2. How the band started?? Serendipity.  Being at the right place, musically, at the right time. Everything fell into place quite easily.

3. What's the message to transmit with your music??
To shed light on the dark reality of our conscious world.

4. What's your method at the time of writing a song??
-Alex Argot: It depends. Rich makes and then emails me the beats to work on.  Most of the time I write 5 or 6 pieces at one time. When I get stuck I shift gears and clear the pallet by introducing an entirely different piece into the writing process. Then there are times I'll blow right through a song. It really depends what is going on in the world and in my life at any given time.  When I'm done writing the lyrics to a few songs; Rich will host a recording session in his studio, where we polish up the ideas together and record them.

5. Which is your music influences??
AA: People who consistently push the boundaries and parameters set by their respective genres.  I dig El-P, Aesop Rock, De La Soul, Saul Williams, Gangstar, KRS ONE, Amon Tobin, Blackalicious, Gaslamp Killer, DJ Shadow,  P.O.S., Portishead, Massive Attack just to name a few…
RC: In addition to those artists I’ll add anything by Mike Patton, Aphex Twin, Boards of Canada, My Bloody Valentine, the Dillinger Escape Plan, Minus the Bear, Kaki King, Deftones, Poison the Well, Quicksand, Mind Over Matter, Esthero, Danger Mouse, Bonobo, Thrice. Been really digging the “Low End Theory” podcasts recently.
6. What plans do you guys have for the future?? If we are able to live off of and continue to create our music for the rest of our lives, we would be very happy. Touring, multiple albums under our belt and a solid record label behind us wouldn’t be so bad either.7. Which has been the funniest prank you guys have been or took part while on tour or after a show?? We don't really pull pranks on each other as much as we just generally bust each others balls on a fairly consistent basis. 8. If you guys were stranded in the middle of nowhere after a show or while on tour. The help is 65 miles away from where you guys are,
¿Who would you guys send to look for help? And if while the rest wait, there's no food and the only way to feed yourself is by eating each other, ¿Who would you eat first?
With this question in mind we will always take the following items on tour with us from now on: a messenger pigeon, survival gear and emergency rations.9. Which country you guys would love to play?To be able to perform in any parts of Europe, the UK, Japan, and or Australia would be amazing.  I guess it really depends on who digs our sound though.10. With which bands you guys would love to share stage??Saul Williams, El-P, De La Soul, Amon Tobin, Public Enemy, P.O.S, DJ Shadow, Aphex Twin, Aesop Rock, The Gaslamp Killer, Atmosphere, Portishead, Blackalicious, just to name a few.
Are you guys OK, with the direction the band is going actually?
We are always striving to be better and more creative in our live and recorded music endeavors.
Check out more: http://www.ArgotecMusic.com
Publicado por Vents en 10:47