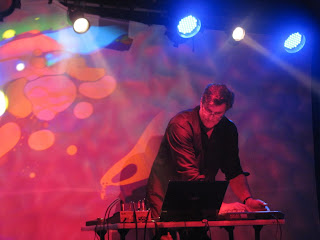 What’s the meaning behind your name? Noise Level is a reference to the idea that music is simply organized noise: strumming, plucking, banging instruments that create musical sounds. It refers to the level of “noise” – however you wish to define it – that exists in music. As well, Noise Level music tends to feature electronic drones, or harmonic audio frames, but the idea of drones actually goes back to Gregorian chants and ancient music in general.

How did you get started with all this? The idea of combining found sounds or sound effects with original music goes back to my teenage years in the Seventies, but was further refined during my years pursuing a Film Theory and Production Degree at Concordia University in Montreal, Quebec in the late Eighties.
I continued to think seriously about music all through grad school – right through to my PhD. in Social and Political Thought in the late Nineties.
Only a few years ago did computer software become available – especially Ableton Live – that allowed me to transcribe the racket inside my own head into musical compositions.

What’s the message to transmit with your music? The message is that the idea of musical “genres” is misguided one because it does not allow for the full spectrum of musical sounds to co-exist.
I create music using a laptop but it doesn’t sound like “laptop” music - whatever that definition may mean to others.
When I compose music, and then later sequence those tracks on a disc, I listen out for contrast and continuity: light vs. dark, minimal vs. maximal, slow vs. fast, etc. My compositions are inclusive and intuitive, so that East Indian vocals can soar over an electronic wash of dub reggae beats and still make musical “sense.”

What’s your method at the time of writing a song? Usually, a particular loop will catch my interest: an electronic texture with harmonic possibilities, an interlocking bass line with a percussion loop, etc. Call it a musical “hook,” if you wish. I try to place that loop in the song where it will catch the listener’s attention in exactly the same way. The song is composed solely to highlight the initial “wow” factor that caught my ear in the first place.

What plans do you guys have for the future?
I wish for Noise Level to continue to grow and develop into film or TV soundtrack work, perhaps create original music for a multimedia theatre presentation, or work with classical or jazz artists in an improvisational capacity. Above all, I wish to exist “outside the box” but not necessarily outside the mainstream.

What has been the greatest day as a musician?
I can’t pick one but every day I feel blessed with “firsts”:
hearing one of my songs on the radio and then charting locally;
winning the Electronic Music category at the Jack Richardson Music Awards; headlining a live show;
playing an electronic club in Toronto, Ontario to an appreciative audience;
being asked to play a benefit at one of my favorite concert halls;
etc.
Above all, I feel blessed that my wife Tracey appreciates and supports the hard work I put into my music.
How’s that for a great day?

What has been the funniest prank you guys have been or took part of while on tour or after a show?
I recently played a benefit to support Mental Health Awareness. At times, the tone of the show was dark, with some of the songs and stories both sad and bleak. When I came out to play, I went for the opposite effect: I wore a black T-shirt with a LED pattern of an equalizer that moved in sync with the music. The place cracked up. It was all people could talk about. It wasn’t a prank but, nonetheless, it was pretty funny and totally out of character.

If you guys were stranded in the middle of nowhere after a show or while on tour….. who would you eat first? Well, since there’s only one of us in the band I’d be more likely to go for help than to stay behind and think about eating myself. My wife doesn’t even like me chewing my fingernails!

What are your hobbies? When I’m not making music, which is most of the time, I’m usually listening to music. If not, I read, watch movies, try desperately to relax and take it easy around the house.

What country would you guys love to play? I’d love to play in England, Western Europe (especially France and Germany), India or North Africa. My bags are packed.
Hey, playing New York City would be a riot, too.

With what bands would guys love to share the stage?
I’d gladly share the stage with ANY musical project Trent Reznor might have going, as well as Swans, Sonic Youth, Patti Smith, Thievery Corporation, Massive Attack, Hell, I’d open for Katy Perry if she’d let me.
Are you guys happy with the direction the band is going? Absolutely. Being a solo artist gives you an incredible sense of freedom to compose AND perform more intuitively. It keeps the improvisational spirit front and centre, and allows me to change up a set list at a moment’s notice. It’s all about “thinking outside the box.”
Try working like this in a four-piece band, where authority is delegated by only one person…. not gonna happen!