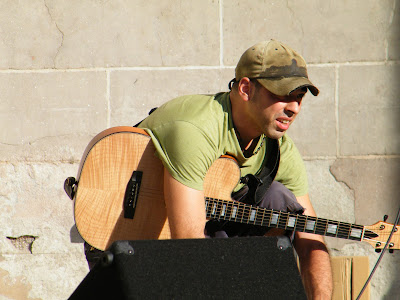 How did you started with all this??
I guess it really all started when Ma forced me to go to those piano lessons when I was little. I wasn't too happy about that at the time but I was always involved with music after that. I played in a couple of bands growing up but 2003 was when I first tried to put together a band in this style. That was really the first time I started having a better idea of how I felt my ideas could work stylistically. So it took a little longer than expected but this year Mr. Hunter was finally created and it's been really exciting to see so much happen so quickly.

What's the message you want to transmit with your music??
The message of our music is to follow what you believe in. Just as there is a groove to music the same idea applies to our lives and the best way to find your groove is to do the things that you love. A writer needs to write, a painter needs to paint, and a teacher needs to teach. It's great experience to try a lot of things and the day you wake and realize there you found what you need to dedicate your life to then you dedicate your life to it. It took me 7 years and it never would have worked unless I really believed in it. So the music is about journeys, struggles, and successes. The music raises a lot of questions that it leaves unanswered because everyone has to experience these things and find their own path.

What's your method at the time of writting a song??
There's no set formula. We can be inspired in different ways. Sometimes you start hearing something beautiful in your head and all you need to do is use the guitar to play it back for someone else. Other times it will take months to try and arrange parts correctly. "Time to Go" was written in about 45 minutes while "Trapped" took a few months of trying to figure out how everything goes together. They also change when played with a full band sometimes.

Who are your music influences??
Stevie Wonder, Steve Morse, Phish, Beethoven, The Dregs, Pink Floyd, Victor Wooten, and a lot of the musicians I've gotten to play with over the last ten years. I think it's also important to learn from non-musical influences as well. Piero Ferrucci and Peter Schiff are two worth checking out.

What plans do you have for the future??
To play a lot of music. It's been amazing the response we've received so far and it's exciting to be playing bigger and more exciting shows. This year we are playing in a great CMJ party during the CMJ Music Marathon in New York City and it's really exciting to be doing things like that. We have some other cool ideas we're working on before the end of the year and it will also be fun to do some more writing and recording in the near future. I think they work together in the sense that being in your groove playing is naturally conducive to a creative writing environment.

Which has been the funniest prank you have been or took part while on tour or after a show??
Our sound guy Mike thinks he's a real jokester. From time to time everyone else thinks it's funny when he hides my amps or other conveniently timed tricks. But don't worry, he's got some a few surprises coming his way soon.

If you were stranded in the middle of nowhere after a show or while on tour. The help is 65 miles away from where you and your band (If any) are, ¿Who would you send to look for help?
Well the band is actually named after my dog Hunter (Ma calls him "Mr. Hunter" when she's about to spoil him) so we should probably send him out. He is a hound dog although he completely loses his sense of smell and concentration whenever a tennis ball is nearby. But he's a trusty dog..... He'll bring us back some help. He might just stop roll around in a pile of leaves or 2 on his way back.

And if while the rest wait, there's no food and the only way to feed yourself is by eating each other, ¿Who would you eat first?
Good god....this is making me thinking about cancelling any touring plans. I guess it would depend on what kind of wine is available to go with the meal.

What country you would love to play?
Italy. We're working on there and Amsterdam for next year. They are two really beautifully countries. The cover art on our new album "The Awakening" is from Amsterdam.

With what bands you would love to share stage??
I'd like to play Thriller with Mike. That would be cool. Pink Floyd was one of my favorites growing up too. Some of their ideas were just so creative and ahead of anything anyone else had even thought of. And not just the actual music but also the thematic ideas, concepts, and style of creativity. Phish would also be fun....we do like to jam. I also had a guest visit by my brother Todd Marcus who is a jazz clarinetist down in Baltimore. That was pretty cool.

Are you OK, with the direction the band is going actually?
I really am. And it took a long time to be able to say that, but the sun shines a little brighter when you can really say yes. We have a lot of fun shows coming up that you can find out about on http://mrhunterband.com/. We're giving away a few open bar passes to some fans for our CMJ show at Bunga's Den (http://bungasden.com/) in New York City on October 20. So email mrhunterband@gmail.com for more info.
Publicado por Vents en 11:46