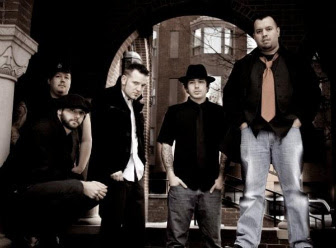 There really is no meaning behind the name its just original and easy to find when you google it. Its hard to come up with a name that another band hasnt already taken, so we are Badclover.
How the band started??

Wow thats a long story! basically 8 years ago I met Eric G. through a practice space our bands shared in ’02, we then started a band in ’06 where we met Ben and Adam who happened to be roomates with the singer of said band. Then I joined a band in ’08 where i met Eric E. we needed a bassist so I brought in Eric G. From there, I was at a bar and ran into Ben and Adam who I knew where musicians, so were talkin, blah blah blah, and Ben sings karoke “A Whole New World” (the Aladdin theme), it blew my mind. So we traded out the guitarist and vocalist for Ben and Adam. That was in November of ’09 and here we are now.

What's the message to transmit with your music??
Basically we just write about our life experiences and whatever the listener wants to take from it is inturpreted by them. We have our dirty songs as well as the sweet ones.

What's your method at the time of writting a song??
When we write a song it just kinda happens, we try not to over think it to much we just let it flow out. Usually Ben or Eric E. will come up with a riff of some sort and Adam will throw in a quick melody over top. My role is to structure the song properly so we have a solid base to build upon. Once all of thats done Ben and Adam will write lyrics to the song and come up with set melodys and harmonys, by the time of our next practice we have a new song.
Who are your music influences??
Personally my biggest influence is Dream Theater (although Portnoy has just left the band). Eric E. is a big Alice in Chains and Sublime fan, Ben digs Johnny Cash, Adam likes Fuel, and Eric G is a metal head. We have a wide variety of influences this is just a few.

What plans do you guys have for the future??
We plan to take over the world. Once this Ep "No Parallel Walls" comes out well probably do a little tour to promote us and make a few bucks to do a full length album. Well just have to wait and see.

What has been the funniest prank you guys have been or took part while on tour or after a show??
We really dont do pranks, our goal after a show is to pack up and party.

If you guys were stranded in the middle of nowhere after a show or while on tour. The help is 65 miles away from where you guys are, ¿Who would you guys send to look for help? And if while the rest wait, there's no food and the only way to feed yourself is by eating each other, ¿Who would you eat first?
Thats a f*cked up question, we would probably send Eric G. since he was a navy boy and has a license to carry in case he gets into trouble. If were only 65 miles out I dont think we would resort to cannibalism.

Well, we have played with Sevendust and Jimmies Chicken Shack so thats awesome. Id like to do a tour with all the central Pennsylvania bands, Fuel, Live, Breaking Ben, Hailstorm, Poison and whoever else im forgetting.
Are you guys OK, with the direction the band is going actually?
Im extremely OK with the direction were going, weve only been a band for 10 months and we keep going up and up.