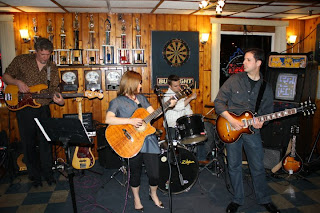 What's the meaning behind the band's name?
When picking a band name, i really just wanted something that matched the songs.  My guitar player, Anthony Zammit, liked "Slaves of Distruction" or "Lords of Hate"!  ;) But, I was driving home from  a recording session in Pittsburgh, and it just popped into my head, The Outskirts!  That's it!  Anthony ended up liking it too... :)


How the band started??

After Berklee, I recorded the EP, Gotta Start Somewhere, and I knew I had to keep it going and start the band.  I recruited Anthony Zammit on guitar, and Jim Boyle on Drums, and, thanks to the internet, we found bassist Don Mangles.  Since then, things have been going really well -- gigging, recording -- and we plan on recording a full length CD by the end of the year.
What's the message to transmit with your music??
Really, I just want people to have fun! Whether listening to the EP or coming to a show, just forget about all the everyday junk and have a good time.
What's your method at the time of writing a song??

Most times, I probably start with the lyrics.   Sometimes it's something somebody says that'll spark an idea, or something I've been feeling, and I'll find a way to put words to it, and the music just...comes out.  I'll play around with chords, even just putting my fingers on random strings to try things out and see how they sound or make me feel. With other songs, however, I will have a riff or progression in my head, and I'll figure out how to play it on guitar.  Then, I'll put words to the music.  It's a lot of trial and error. I'd rather do that than map it out on a piece of paper.  There's no fun in that!
Which is your music influences??

I have a lot of different influences - starting out it was Stevie Ray Vaughan, Eva Cassidy, Bonnie Raitt, Jonny Lang, Kenny Wayne Shepherd, then it was Silverchair and Tori Amos, Lisa Loeb and a lot of musical theater.  Then Sugarland, Gretchen Wilson, and more recently it's people like Patty Griffin, Ryan Adams, Stephen Kellogg...
What plans do you guys have for the future??

To play out as much as possible and to record a full length CD with the current line up of The Outskirts by the end of 2011!  Keep a lookout on www.AngieMarieMusic.com for upcoming shows and new recordings/videos!
Which has been the funniest prank you guys have been or took part while on tour or after a show??
Oh gosh, I'm probably the most gullible/tease-able person.  I get teased by the guys all the time!

If you guys were stranded in the middle of nowhere after a show or while on tour. The help is 65 miles away from where you guys are, ¿Who would you guys send to look for help? And if while the rest wait, there's no food and the only way to feed yourself is by eating each other, ¿Who would you eat first?
Well, considering our bass player Don is probably over 6' tall....and I'm pretty sure the rest of us could take him down....he'd be the one to go.  Sorry, Don!
Which country you guys would love to play?
We're huge in Antarctica!

With which bands you guys would love to share stage??
Would love love love to play with Patty Griffin or Stephen Kellogg -- really any of my main influences.

Are you guys OK, with the direction the band is going actually?
We're progressing every day -- it's really exciting!!!