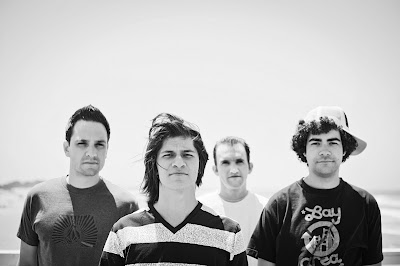 What's the meaning behind the band's name?
Its basically two words that were put together to kind of identify the two types of music that we play.  "INDO" standing for the reggae side of our music (I wont elaborate, you should be able to figure it out), and "SURF" standing for the surf instrumental or "Surf" inspired music that we play.  We obviously play other types of music, now a days,  but that is what one of our friends came up with when we first started.  We more or lease don't look at the name like that anymore...as two parts.  it's just "INDOSURF" now...it stands for our own type of music now and own identity...which feels pretty good..

How did you guys get started with all this??
We started the whole thing back when we were in high school.   Matt, who is the lead singer (we'll refer to him as SHMOUK for the rest of this interview....ONLY Shmouk...) has been my best bud since we were in 1st grade.  We grew up together, loving music, and I actually ended up taking trumpet lessons when i was about in the 3rd grade...so I was very involved with music at a young age.  Another one of my buddies, Eric, (who is an ex singer for the band), was a good friend of mine and Matt's by the time we were sophmores in high school.  Matt had eventually picked up how to strum a few chords on the guitar by then, and Eric had learned how to play the bass a little bit.  I was really into jazz at the time with my horn, but Eric and Matt were really into Sublime and some of the other early Skunk Records bands (sublime, The Ziggens, Slightly Stoopid, etc...).  They were looking for a drummer because they wanted to start a "sublime" like band, and although i wasn't really into that type of music (they got me listening to The Ziggens and i was a changed man), or even played drums, my house had a drum set cause my little brother took lessons.  I was good enough to keep a beat on the set just cause i'd been in music for such a long time by then, and just said what the hell.  And thus, the greatest thing since yo momma jokes was born.

What's the message to transmit with your music??
To be original.  Obviously that's way easier said than done...now a days its so hard cause everything has been done before.  But within the reggae realm, alot of bands I personally believe sound ALOT a like.  Its a hard genre to stand out in, cause the music can be so limiting sometimes, but I just feel like alot of bands are trying to be the next Sublime, or the next Slightly Stoopid, or whatever.  God bless every band, but we're taking our love for that type of music, and other types of music, and really trying to find ways to make it sound original.  Whats great about it sometimes (alot of times actually) is that concept natually comes out sometimes too...all four of listen to so many different types of music and artists that it just comes out on its own alot too.  We just want to play our own music.  We just want to write a good song and be that band that other people cover, not the other way around, ya know?

What's your method at the time of writing a song??
It depends.  More recently, we've been talking about trying to be a bit more collaborative.  For the greater part of the past two years, myself has been doing the majority of the writing.  We all do it tho...Matt, Dave, everyone.  Someone will write either a whole song, with lyrics and everything, and show it to the group, or someone will have like a riff or a bass line, bring that to prac, and we'll kinda talk about it and figure out stuff that we can do with it.  Either or!

Who are your music influences??
We have TONS.  I listed some earlier for the band...Sublime, Slightly Stoopid, The Ziggens, Pepper, Rx Bandits, Dick Dale...all those reggae, rock, and surf guys.  For me personally I love anything from Miles Davis and Coltrane to Motion City Soundtrack and Coheed And Cambria.  Some of the other guys influences span from E-40 to Mute Math to Guns N Roses.  Its seriously all over the place.

What plans do you guys have for the future??
Long term hopefully to be able to make a living playing our music!  Shorter term, we are about to head into the studio to record our first full length album entitled "A Hawaiian Love Story".  Its a 14 song, conceptual reggae/rock/alternative album that deals with love and loss in short.  We are super excited about it and cant wait to tour the state promoting it after we are done!!!

What has been the funniest prank you guys have been or took part while on tour or after a show??
I dunno if it was really a prank that someone played on him, but at The Vans Warped Tour in 2009, some of the guys went to go chill by the car for a bit, get a lil brew in them, and locked Shmouk's keys in the car.  That made for a very interesting afternoon cause our gear was still inside.  And it made for a very angry Shmouk too.

If you guys were stranded in the middle of nowhere after a show or while on tour. The help is 65 miles away from where you guys are, ¿Who would you guys send to look for help? And if while the rest wait, there's no food and the only way to feed yourself is by eating each other, ¿Who would you eat first?
Either me and or Shmouk would probably go look for help i bet.  I'm leaning more towards Shmouk, but either one of us.  As far as who we would eat, If it was just us four....probably Dave...hahah!  I can't really decide who we would eat first, but I do know that if Rego was with us he'd definetly go first.

What country you guys would love to play?
Man, that's a tough question.  I think somewhere Islandish would be awesome, like Costa Mesa or Jamaica.  Maybe even Mexico.  That'd be pretty sweet.

With what bands you guys would love to share stage??
Any of our influences would be sick! We've actually been lucky to open up for The Ziggens and Bert's new band, Bert Susanka and The Astronaut Love Triangle.  I think playing along side Sublime with Rome would be pretty epic.

Are you guys OK, with the direction the band is going so far?
Of course!  Like I was saying earlier we are going to try and be a bit more collaborative in the song writing process after we record our new album...try to have more parts from everyone in the song writing process vs. just one.  If that works or not is remain to be seen, but definetly worth a try!  But even with that being said, everything is great!  Look out for our new album that should be out early next year!!!!!