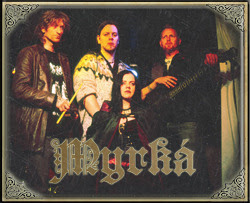 - What's the meaning behind the band's name?
Myrká means "Dark river" in direct translation. It is however a name of a place where very spooky things took place a long time ago. There is a famous icelandic ghost story about a deacon who gets killed there and tries to kill his girlfriend after he dies. This deacon drowned in the river Myrká.
This place is located very near where we, the band members, live in Akureyri, Iceland.
- How the band started??
The band Myrká was started about 2 years ago when our old band Hugsýki quit, which was a five piece band. Two members left the band so the three remaining members, Guðný, Stefán and Helgi continued to play together and started to look for a new guitar player. When we found Guðjón things just really came together and we decided we really didn't need a bass player but just use the keyboard ala The Doors for bass sounds... unless we would find some super talented bass player which we are still looking for!
- What's the message to transmit with your music??
There isn't any direct message in our music, we just want to make people feel real, and often intense emotions. The songs are usually about dark and sometimes sad things but we find that melancholy music makes certain kinds of people happy, like ourselves. By playing and listening to dark music it lifts our spirits and makes us really feel good.
- What's your method at the time of writting a song??
Its very different from one song to anther. We all try to work together but usually Stefan or Guðný will write the music and the other one will write the lyrics. Sometimes one of them will start a song and the other one will finish it. Guðjón and Helgi then finalize the songs and give them life with their input of course.
- Which is your music influences??
We have a lot of different influences when it comes to other musicians and each one of us really have our own favorites so it's hard to name them all but our main inspiration comes from the power of the Icelandic nature and old Icelandic traditional music.
- What plans do you guys have for the future??
We plan to continue to expand our audience and fan base all over the world. Our main goal is to be able to tour the world as much as possible. We plan to release another album soon and we believe that the new album will bring us to a new level.
- Which has been the greatest day in the band?
There have been many great days in the band but the happiest day might have been the day that we got signed with a label allowing us to release our CD in a professional manner.
- Which has been the funniest prank you guys have been or took part while on tour or after a show??
We're such "angels" and good friends that we really haven't done any real pranks to each other. Its all love and happiness .....;)
Once after a show in Brooklyn NY, Stefán was driving the car back home and decided not to go home but to drive them out to the middle of nowhere just to scare them a little since they were already a little scared after a night in a pretty bad neighborhood in Brooklyn, believing that he would find the way back home easily. But of course that wasn't that case and we got lost for 4 hours driving around every part of New York.
- If you guys were stranded in the middle of nowhere after a show or while on tour. The help is 65 miles away from where you guys are, ¿Who would you guys send to look for help? And if while the rest wait, there's no food and the only way to feed yourself is by eating each other, ¿Who would you eat first?
We would send Guðjón, the guitar player, to look for help because every time someone else tries to find the way he complains the loudest! So let him find the way. We have also discovered that there are vitamins in music so we don't really need food to survive for very long time, only our music! If we HAD to eat someone it would be Helgi, the drummer, he would definitely be the healthiest choice for us since he has very tight and strong muscles and absolutely no fat.
- What are your hobbies?
We have many hobbies and the band is really a multi-talented group of artists, not only in music. Guðný Lára, the singer, makes gothic jewlery, paints and design clothes. Her artist name is "Arál design". Guðjón creates dark graphic art under the name "Dark Art G". We are also into theater and performance art as a group.
- Which country you guys would love to play?
We would love to play any country that wants us but right now we really want to tour Canada and Germany. Eastern Europe is also very interesting for our kind of music.
- With which bands you guys would love to share stage??
For those that are still alive and touring I would have to say Muse or Evanescense.
- Are you guys OK, with the direction the band is going actually?
Of course! Otherwise we would change the direction! It's all under our control. We are only doing this because we enjoy it so much, the minute we're not enjoying we'll change directions and try something different.
Check out more: http://www.reverbnation.com/myrka
Publicado por Vents en 14:24