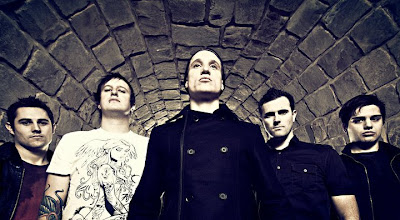 What's the meaning behind the band's name?
If you look up the 2 words del Santo in the dictionary you will see the meaning 'the Saint’ We had no idea about the literal meaning when we picked the name, as we were simply throwing ideas around and chose it more for how it sounds. Which we thought suited the bands style. So we are basically pretending that we are a non religious rock band, but really all we are doing is preaching to you about the holy one with subliminal messages in our lyrics. If you play our songs backwards you will hear the voice of the holy one!  (jokes)

How the band started??
As a band, Tripgauge approached Steve to sing for them in 07,
Steve had recently split with a band called Dreamshifter. He accepted the offer and we wrote a few tunes which sounded amazing and felt great. We decided to start fresh, so we changed the name and later recorded a 2 song EP with a well known rock producer. Unfortunately a few of us started having creative differences in the writing! Imagine that?! BAND MEMBERS HAVING CREATIVE DIFFERENCES! WELL I NEVER!  Which..... eventually was the demise of the band and so we split in late 08. We recently reformed the band around the start of 2010 with 2 new members (bassist & guitarist) after many months of intensely painful auditions, which we regret not filming as we're certain we could of made a very interesting comedy documentary.

What's the message to transmit with your music?
Our message is this: WATCH OUT FOR THE FEMALE RACE! THEY'RE ALL MAD! No, we love the women of this would and this is why the majority of our lyrics are about them. Its not a hang up we have or anything scary like that, its more to do with the experiences we've had in relationships and well maybe we have fooled ourselves completely into thinking we have half an idea about how they work ha! There are other subject matters that Steve throws his spin on as well, but to answer your question simply, delSanto is made up of musos which all share more of a focus on creating great melody, structure, tones, dynamics and quality of songs, over sending a general message out to our audience.

What's your method at the time of writing a song??
The lyrics process starts with using key words that fit and sound great. And then comes the painful yet rewarding process of trying to put the big jig saw puzzle together by
changing various lyrics and shaping them into something that makes sense and is hopefully meaningful to you, the listener, in the end.
Basically, the band composes the songs and records demos for our singer. Who then takes the tracks and writes melodies and extra lyrics for the songs in his spare time whilst the band works on getting the songs arranged.
The songs are hardly ever an easy process for us. We spend allot of time fine tuning them. At the end of the day when we have worked until a song is near perfect, it gives us a mountain of satisfaction and pride to listen back to it.

What plans do you guys have for the future??
Well, who doesn't want to be living off touring and writing music, instead of holding down jobs whilst playing in our spare time? We're currently looking at all avenues we can to promote ourselves, including playing gigs, getting supports with major acts, finding management and publicists and also looking into having our music included in movies and computer games.

What has been the funniest prank you guys have been or took part while on tour or after a show?
STEVE-> It hasn't happened yet but it will. I have in my possession the hottest chillies in the world, the famous Naga Jolokia chillies. I have about 20 of them and I am simply going to buy coloured toilet paper to disguise the chillie that I'm going to rub on both sides of about 10 sheets, then set up a camera. And on this recording you will see a delSanto member creating youtube gold my friend, and maybe creating a law suit against me too.

If you guys were stranded in the middle of nowhere after a show or while on tour. The help is 65 miles away from where you guys are, ¿Who would you guys send to look for help? And if while the rest wait, there's no food and the only way to feed yourself is by eating each other, ¿Who would you eat first?
We'd send Paul. But this is a tough decision, as he'd also be the first person we'd eat! So we would prefer to eat his legs and then make him crawl away to find help for us.

What country would you guys love to play?
We definitely want to play Scandinavia and Japan

With what bands you guys would love to share stage?
Our influences of course. Oh and Justin Bieber!

Are you guys OK, with the direction the band is going actually?
We have really just started this band again. Starting a band from scratch, trying to build up a fan base again is a hard thing to do, but it does build character and you learn the fast way how to deal with whatever crap gets thrown your way, so we are treating our initialisation back onto the music industry as a free education. Being professional, but at the same time having fun along the way.
We are confident the band has the right elements to get somewhere in the industry so we all have positive minds about the future.