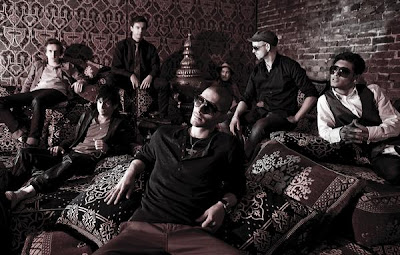 What's the meaning behind the band's name?
FORZA comes from the Latin word 'Vis' meaning strenght or force. In our translation we've added hope. It has to do with the bands history which you can read all about under next question.

How the band started??
We started as a percussion group at a reception centre for refugees in Bergen, Norway. Some of us were refugee kids in Norway and we started playing drums together since we could not speak together due to language barriers. We started collecting plastic and metal bins and modified them into drums. Then we did some shows in our local community. With the money we earned and support from the reception center we bought our first instruments.

By coincidences we met each other along the way, the original drummers and the rest of us. So we are a bunch of musicians, some of us born here and some of us drifted ashore from other parts of the world. We
became Forza, a folk hip-hop hybrid, or worldmusichiphoppunk if you like.

What's the message to transmit with your music??
If we were a political party we would have a clear message. But we're not. We're a band. Our lyrics are inspired by our different origins, about different cultures and cultural clashes. Still, if we were to have a political agenda it would be something like explaining how people should focus on coexistence instead of promoting prejudices and egoism. Indeed some of our lyrics are very clear about this.

What's your method at the time of writting a song??
Say that one of us comes up with a guitar lick, a rythm groove or a text line or whatever. We simply bring it before the rest of the band and start working it out together. So initially there is an idea of something, but we never know where this idea will take us. This process can take a few days or some months. Some songs are more difficult to write than other.

Who are your music influences??
We listen to all kind of music; hip-hop, rock, metal & pop. Within our band there's a wide variety of musical taste. But when it comes to composing, we let us inspire by old folk music from different parts of the world, mainly from the Balkans and oriental stuff. The world is like a well of music that has been played since the early ages. This is where we get some of our inspiration.

What plans do you guys have for the future??
Beside being able to pay our bills you mean? We look forward to finish our new album and to play in different parts of the world. Lots of festivals coming up next year.

Which has been the funniest prank you guys have been or took part while on tour or after a show??
This is about about a former member of the band. A chronical oversleeper. We had this gig, and he didn't show up at the venue on the scheduled time. We called his cell, we even sent some people to his house with no result. So we had to start without him. In the middle of the set, we explained the audience the situation, and phoned him again from stage. He woke up pretty fast with help from the audience. I think it was the last time he missed a gig really.

If you guys were stranded in the middle of nowhere after a show orwhile on tour. The help is 65 miles away from where you guys are, ¿Who would you guys send to look for help? And if while the rest wait, there's no food and the only way to feed yourself is by eating each other, ¿Who would you eat first?
We would definetely send Rudi (the accordion player) to look for help. Beacuse he is the old & wise (and too old to eat anyway, bad meat). Then we might just eat Jaser or Milad. Because they are both drummers, and if we got help in time we would still have one of them left, and the damage wouldnt be so big..

With what bands you guys would love to share stage??
With Ojos De Brujo (Spain). They are great. Great flamenco, funk & hiphop fusion.

Are you guys OK, with the direction the band is going actually?
Absolutely. Our latest single on rotation at the Norwegian main radio channels, quite a lot attention from the media and good support from our audience. We're not complaining. The future looks like a big Piñata :)