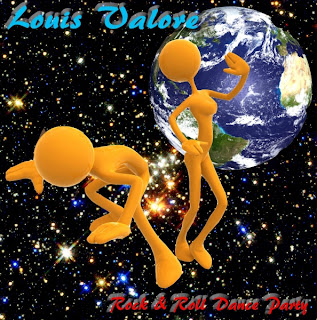 How did you get started with all this?
Growing up I always loved music, so one day I decided to pick up a guitar.. Or was it the guitar who picked up me?? (:

What's the message to transmit with your music?The message I seek to transmit is one of hope... fun... and  innocence.. I think all of us could use hope.. fun.. and innocence... At least, i could!!  lol!!

What's your method at the time of writting a song?I usually pick up my acoustic/ electric guitar and start strumming.. I don' t set out to write anything as I have found that the best songs seem to write themselves.. You' re almost like a spectator as they will not let you rest until they are complete.. All of the songs on my new "rock n roll dance party" CD were written in this fashion.. The only common thread was that i wanted the songs to reflect the fun and innocence of the late 50's/early 60's.. When true love was forever.. etc.. etc.. etc... I've always been a big fan of the early beatles... I believe that there is a universal timelessness in simplicity.. Probably because i am simpleminded!!  (:

Who are your music influences?My influences are pretty diverse... Ranging from the Beatles... Chuck Berry... Buddy Holly.. Dion... etc..
I also love frank sinatra cause when it comes to pure singing, especially songs of love and love lost, he can't be beat... I also love groups like the O'jays... Spinners... Harold Melvin and the Blue Notes... And that whole sound of philadelphia sound... I also like Brian Eno (his solo albums)... David Bowie.. After that, I'm more of liking a certain song rather than a band...

What plans do you guys have for the future?My future plans consist of lots of recording, performing and dreaming!! As we all know, everything begins with a dream!!

What has been the funniest prank you guys have been or took part of while on tour or after a show?The funniest prank I think I did was at a show at a venue called Bar East in NY... I was supposed to go on at 9:00pm... But for some reason, I didn't get to go on until 10:30 pm and as soon as i started my first song, a whole group of drunk people arrived for a private wedding ceremony!! So of course they expected me to leave the stage... What I did was instead of leaving the stage, I performed one of my deepest lyrical songs called: " I wanna know"... Which questions life's meaning... Why are we here, etc..etc.. very deep!!
I usually goes over quite well at the end of the set... People still got into it as it's great song, but people at a wedding are all bombed and really don't want to think!! So after that I broke into the Beatle' s classic: "Honey Don't" and got everyone up and dancing!! then I wished the bride and groom love and happiness forever and ever and  gracefully left the stage as they had a wedding band ready to perform!! All part of being a musician!!

If you guys were stranded in the middle of nowhere after a show or while on tour, and the help is 65 miles away from where you guys are, who would you guys send to look for help? And if while the rest wait, there's no food and the only way to feed yourself is by eating each other, who would you eat first?I perform by myself so I would have to eat myself!!  I'm Italian so there's plenty of pizza in me!! (:

What country would you guys love to play?I'd love to perform in England... Know any UK booking agents??

With what bands would you guys love to share the stage?I would love to open for U2 or Lady Gaga... Don't ask me why...