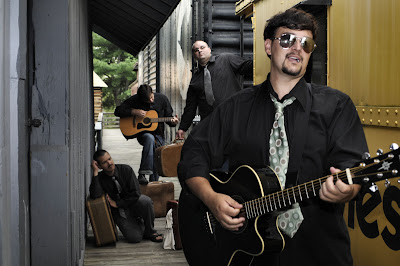 What's the meaning behind the band's name?
There's not much meaning, unfortunately. In the early days of the band, we got together and threw names in a hat, and voted. I lost, I wanted Juke Joint Daddies.

How did you guys get started with all this??
In 2006, I played solo a lot, but the area trended toward bands. So, I put a top notch band together with local area veterans, and started gigging. I always had a yearning to get this album recorded though.

What's the message to transmit with your music??
It's tough for me to have perspective on these things, but after listening to the album as a whole, I'd say it's a record for people in transition, people who are feeling lost at sea. People who are the rudderless ships moving through life hoping for something to be good for a change.

What's your method at the time of writing a song??
When I was younger, I would write with many different methods. Sometimes complete lyrics first, writing music to fit the mood.  Recently though, I've shifted to writing titles. I have pages filled with titles in my notebook, and I wait for the story to develop. I love co-writing too!

Who are your music influences??
Musically, King's X, especially grooves and harmony vocal arrangements. John Hiatt for song form and style, Dashboard Confessional for delivery, Led Zepplin for their unpredictable changes. Also, the Katies for their dual nature bridges.


What plans do you guys have for the future??
We're partnering with Suede Management and Booking to put together a Florida Spring Break Tour in March. We're very excited with their connections. They absolutely want us to succeed, and try to pull people together to help us help ourselves. I have a bunch of kids songs that I'd love to record, and have most of the next rock record written. We'll take a different approach than Leavers though, more jamming and seeing what comes out of it. I really enjoy the varied styles of the guys in this band, and I know the whole will be better for it.
What has been the funniest prank you guys have been or took part while on tour or after a show??
One time we put peanut butter on Matty K's drum sticks. We waited with anticipation, could hardly contain ourselves. He started playing, a stick flew and stabbed a crowd member in the heart. Luckily, that dude was a vampire, so after he turned to dust, the crowd just kept on dancing.
If you guys were stranded in the middle of nowhere after a show or while on tour. The help is 65 miles away from where you guys are, ¿Who would you guys send to look for help? And if while the rest wait, there's no food and the only way to feed yourself is by eating each other, ¿Who would you eat first?
Karl is the smallest, and seemingly easiest to over take, but he has military training and is WIREY. In reality, Carter and I could fix anything with paper clips and duct tape, which we always have in the band trailer. We'd fix the van, and make it to the gig with 5 minutes to spare.
What country you guys would love to play?
I'd love to tour Europe.  The people there have a section in their budget for concerts, which is something Americans don't hold very high these days.  I also think we'd be huge in Estonia.
With what bands you guys would love to share stage??
Lost Pages, The Killers, Iron Maiden, Eric Clapton, King's X, Ugly, The Black Crows, Muse...there are amazing live bands out there that I would love to play with, and take a note book and a sharp pencil.
Are you guys OK, with the direction the band is going actually?
The band is going in a good direction.  With the addition of Joe Balbaugh on keys/trombone/guitar, it will free me up to just sing and pull people in. The album is about to release, and while there's a lot of work that goes into promoting it, I am certain it will bring us good things.