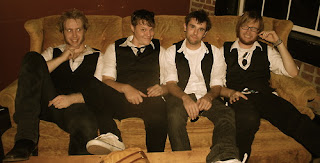 How did you get started with all this?? The Black Shades formed when the frontman Aaron Clark, and the bassist Michael Dean started a cover band together. Somewhere during the learning of other's music, they decided to write some original songs and really liked what was coming out. What's the message to transmit with your music?? That even lovers can rock and be fighters at the same time. What's your method at the time of writing a song?? Usually Aaron will develop a guitar lick, and if it's he breaks into dancing when he plays it, then it's a keeper. Afterwards, the band will build onto it and collaborate. Michael Dean puts in a bass line (unless Aaron already wrote one), Michael Thomas rips some solo action, and Jerry Kessinger lays down the drummins. Who are your music influences??
David Bowie and The White Stripes are the most dominant influences but to name them all is nearly impossible.

What plans do you have for the future?? In the near future, we plan to start on our full length album, and to develop more songs. Looking to play festivals whenever we get a chance, and enjoy the occasional drink.

Which has been the funniest prank you have been or took part while on tour or after a show??
Not really a prank but a game. Our van has a small cubby seat in the back that we have labeled "The Hole". Unfortunately, someone HAS to sit in The Hole so we have a "No Hole Shotgun" game (much like calling "shotgun"). Last person to call it loses, therefore having to sit in the hole. People get delirious back there.

If you were stranded in the middle of nowhere after a show or while on tour. The help is 65 miles away from where you and your band (If any) are, ¿Who would you send to look for help? And if while the rest wait, there's no food and the only way to feed yourself is by eating each other, ¿Who would you eat first?
Would send Aaron Clark because he has massive sideburn chops that get noticed anywhere. Someone would surely pick him up. We would most likely eat Michael Thomas (guitarist and keyboards) because he is the youngest, therefore has the most tender meat.

Which country you would love to play? England or Japan. England because alot of good music comes out of there, and Japan for the culture and cuisine.

With which bands you would love to share stage?? The Dead Weather is pretty much at the top of that list.
Are you OK, with the direction the band is going actually? Yeah, we've only been a band for almost a year but have been in this current lineup since only April, and we've accomplished so much since then and have been pushing ourselves to be better. We all push each other to get better individually and as a whole. We are looking forward to 2011 and hope that it's ready for us.
Check out more: http://www.myspace.com/wearetheblackshades