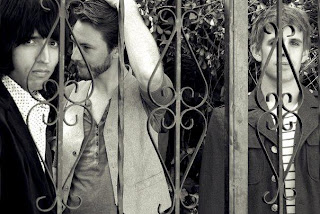 What's the meaning behind the band's name? The band is actually named after a family of birds that lived in the walls at Tommy’s house. They nested in there and one day while we were having a spring break party at his house, a friend asked, "What is that noise coming from the walls?"  Tommy explained what the noises were. The friend then replied "Oh those are The Wallburds!" we knew then that would be the name of the band.
How the band started?? The Wallburds were born when Tommy was kicked out of a band he played drums for in high school. Cesar played guitar in that band and when his friend Tommy got the boot, he quit in protest and started a new band with Tommy: The Wallburds. The band went through several bass players in the early years but finally found a solid lineup when Trevor came aboard in 2009.
What's the message you guys want to transmit with your music?? It's rock-n-roll!  Our songs are about girls, love, heartbreak, and all the many different things that life throws at you!
What's your method at the time of writing a song?? We often start with just a guitar or bass riff and just mess around and jam out with that for a while to see if it develops into anything we like. If it starts to come together a bit, then we really start trying to map out structure. Once we get that down, we come up with a vocal melody. Lyrics are always the last piece of the puzzle. Once we have a complete song, we cut a few demos to make sure we like the way everything sounds. Only a few of the songs we write are ones we end up using.
Who are your music influences?? Our influences are pretty broad and span the classic rock bands like the Beatles, The Rolling stones, Led Zeppeling, Hendrix, The Kinks, through the grunge bands like Nirvana and Stone Temple Pilots, all the way to more modern bands like Radiohead and the Black Keys.
What plans do you guys have for the future?? We have a lot of things that we’re working on right now. We just released our debut EP, (With a U) and are working on promoting it. We’re also going to start shooting a video for “Moments Before Midnight” and are working on a behind-the-scenes documentary about a day in the life of the band.
Which has been the funniest prank you guys have been or took part while on tour or after a show?? When we were driving to South-by-southwest in our band van last year, we were driving somewhat in excess of the legal speed limit on Interstate 10 through west Texas. We see this copgoing the other direction on the freeway slow down and make a U-turn to get onto our side of the freeway. Well we figured for sure that we were about to get a ticket, but we tried to slow down and let him pass just in case he hadn’t caught us earlier. As he gets near us, he keeps going slower and slower, until we’re driving side-by-side going 20 mph below the speed limit. Then, he starts blasting our music over his PA at us and wishes us good luck before speeding off. He was just bored and decided to mess with us!
If you guys were stranded in the middle of nowhere after a show or while on tour. The help is 65 miles away from where you guys are, ¿Who would you guys send to look for help? And if while the rest wait, there's no food and the only way to feed yourself is by eating each other, ¿Who would you eat first?
Cesar - Trevor since he is in great shape to walk that distance. Did we mention he is training for a marathon, he also plays golf. Also we would eat Trevor first he just looks so tasty or that’s what the ladies say.
Tommy – Yeah totally.  Cesar doesn’t have any meat on him so it’d have to be Trevor.
Trevor – Wow, thanks guys.  Remind me never to go anywhere with you two without a chaperone to watch my back.
Which country you guys would love to play? All of them if possible we just want to play everywhere we can. England, the Carribean and Japan would be good starting points.
With which bands you guys would love to share stage? Black Rebel Motorcycle Club, Rolling Stones, STP's, Paul Mc Cartney, Kings of Leon
Are you guys OK, with the direction the band is going actually? Yes we are working really hard and wherever we go we are sure that is what was meant to be.
Check out more: http://www.myspace.com/thewallbirds
Publicado por Vents en 11:57