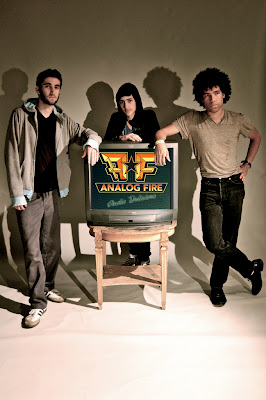 What's the meaning behind the band's name? In a day and age where music has become so digital and so advanced in composition techniques, we have strived to make an example of the new era of music. Taking styles from all new and popular genres, while holding true to a consistent sound, the band has made an amalgam of futuristic and new age tunes. Using laptops and midi-controllers in the recording and composition room, they hold true to the new writing techniques. On stage, they rework it all to be a full live experience. Analog Fire is the death of the old way of music, and a look to the future of technology and new composition technique.

How did you guys get started with all this? In 2009, the band’s singer and keyboardist, Eno began making loops and beats on a budget laptop through Reason and Logic. After jamming a few times with some friends, he added a synthesizer to the palate and began to play in addition to his programming. One evening he began talking with Greg Louisy who had been a friend from a few years back who had just started working on some demo tracks. They shared each other’s work and instantly clicked. Greg then picked up the programming backbone of the band and started composing too. Asher Elbaz, a neighbor of Eno's who had been studying classical guitar at Julliard jumped aboard jamming and then also became a part of the live aspect of the recordings and live performances.

What's the message to transmit with your music?? We want people to move, and to feel the music. With instrumental arrangements, rap songs, vocal melodies and some spoken word tracks, we want fans to find their own niche in the albums and live shows with a little bit of something for everyone. This way, we can also get people in the audience who like rap to come out and hear other material while some techno-lovers groove to instrumental jams. Everyone comes together this way, and can be exposed to something new.

What's your method at the time of writing a song?? Inspiration comes whenever it wants to. It can make its appearance in the middle of the night, in the middle of the street or in the middle of a conversation. It always helps to have a laptop near or phone that can record vocals. We usually write like this. Many melodies and hooks have been conceived on escalators running down to catch trains and during midnight improvisations when sleep just can’t happen. If someone ever goes through our phone’s voice memos they’ll hear the very first sketches of some of our older jams.

Who are your music influences?? We really like the drum programming that Deadmau5, Passion Pit and Radiohead do. We especially take a like in the Idioteque samples of Radiohead’s ‘KID A’. In terms of synthesized sounds, we gear towards a more Crystal Castles, Junior Boys or Kanye West sound. With vocals, Junior Boys are a big influence and Chromeo has been a big inspiration for synth solos and guitar licks. Phoenix and Whitest Boy Alive have also been huge influences when writing our guitar parts.

What plans do you guys have for the future?? We hope to tour more and play more festivals. We also have begun playing DJ sets and hope to hit up a bunch of clubs with our new music. We also hope to get a record deal to help us promote more. We'd love to pack the house at our shows so the dancing will be as intimate as possible. Dancing is so much different when everyone is close together and jumping. The sound is also absorbed more.

What has been the funniest prank you guys have been or took part while on tour or after a show?? We don’t pull too many crazy stunts but after shows we love getting our rapper and his friends together for some freestyle and rap battles. We do this in the middle of the block or street with our fans gathered around and people come up and watch. It’s a lot of fun and gets a cool crowd involved.

If you guys were stranded in the middle of nowhere after a show or while on tour. The help is 65 miles away from where you guys are, ¿Who would you guys send to look for help? And if while the rest wait, there's no food and the only way to feed yourself is by eating each other, ¿Who would you eat first?
Roadkill and Cactus would have to settle or else we couldn’t play the next show together!

What country you guys would love to play? France or Germany would be a lot of fun, especially because we respect the club scene out there and the electronic musicians it brought out. It would also be an experience to play a DJ set of some sort in a desert in a remote location. The mountains would create a non-replicable echo and reverb for the drums and synths.

With what bands you guys would love to share stage??
Ratatat was the first band that influenced Analog Fire. I (Eno) remember going to their show at Terminal 5 a few years back when they were first blowing up. It had been my first concert where there was a dance floor. You could feel the drums and music and everyone just let loose and jumped to the strobe lights and confetti. The music was powerful. I went back home and downloaded a copy of Reason and got a drum machine. That’s how Analog Fire began. To share a stage with Ratatat would bring us back to square one and be an amazing experience.

Are you guys OK, with the direction the band is going actually? Yes. All takes time. We would love more promotion and more time to write but while still studying in college it's tough to prioritize. Right now, we’re looking for a publicist. Our priority is to get our music out to as many people as possible to that once we play shows the word will be spread a little faster. Touring is also tough when starting out.