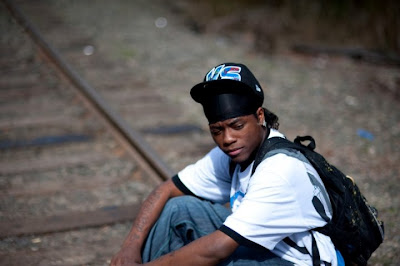 SkyBlew goes beyond the place we are now (the ground),he goes to the sky with his thoughts and lyrics,but the world is soo confused that they dont understand what music is and what going for your dreams mean,so its like the sky blows him back to earth(SkyBlew)so he can help the people by giving them something that they need to hear & something that they wanna hear but their just not used to hearing it,but when they hear it,they will love it and wanna keep hearing more and more and even when the sky looks grey,he will Paint The Sky,Blew with his music and with the words he say
How did you get started with all this??
Well I Guess I Just Decided That One Day,"Hey Im Tired of hearing whats on the radio so maybe I should rap and give the people what they want"& I been Painting The Sky,Blew everysince then...btw I dont rap,I paint The Sky,Blew!!!!

What's the message to transmit with your music??
Bascially,im not only trying to be a rolemodel in my music but Im trying to tell people to go for their dreams(may sound corny,but dreams do come true)..no matter what they may have holding them down or what people may have said to them,dont worry bout it,I gotcha,SkyBlew got ya back :)

What's your method at the time of writing a song??
Well it depends on how im feeling at that tome sometimes I just pull out the pen and paper and write a story or jot my thoughts down or I sit and listen to the beat and alot of words circulate in my head so I turn them into a song

What plans do you have for the future??
Taking over the world.LoL.JP.....Sold Out Shows...Being a inspiration for the youth...& To Change people's outlook on music and Hip Hop..Bringing That Feel Good Music Back..My Mouth Is A Paintbrush&Ima Rearrange The Way That They Paint Us...Okaaaaay!

What has been the funniest prank you guys have been or took part while on tour or after a show??
After a talent show when I was younger,(like 15)I went back home to my grandmas house(this was a looong time ago)well my cousin Rino and I & always played pranks on each other&one of the pranks was I would slide a CD in the bathroom door So it would unlock the door and while he taking a shower(no homo)lol and turn the lights off so he would be all like stop man chill out chill out but that day after the show he was ready so he had taped a curling iron(or whatever the thing is females use to curl their hair)to the lightswitch,he had it plugged in and it was hot as heck(but I didnt know he did this)so I reached my hand in the door and put my hand on the lightswitch and felt it,I was like what the heck is this so I grabbed it and it burned my palm..lol..sucks right?

If you guys were stranded in the middle of nowhere after a show or while on tour. The help is 65 miles away from where you guys are, ¿Who would you guys send to look for help? And if while the rest wait, there's no food and the only way to feed yourself is by eating each other, ¿Who would you eat first?
WOW...LoL..well I would have to send my bro Nigel because he knows Ninjutsu (need I say more?) LoL.. So just in case something goes down he would take care for that issue..Far as the last question I would have to eat The Tour bus driver! Haha.. nah My crew we some survivors we will go out there and find some food even if we gotta eat a rat or something...WHATEVER IT TAKES!

What country you guys would love to play?
France!! :)

With what bands you guys would love to share stage??
Kanye West, Lupe Fiasco, N.E.R.D, J.Cole

Are you OK, with the direction the band is going actually?
Yea Im Actually doing pretty good so ima keep doing what im doing,got a good manager so ima keep making making that good music people wanna hear and step in the game little by little each year..Okaaaay! Paint The Sky, Blew!!!