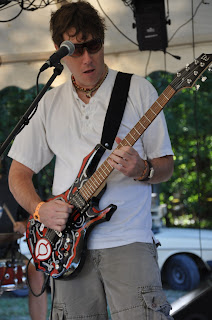 What's the meaning behind your name?
Rubix Wheel is based off the idea of the light show. When the lights from the stage collide with the energy of the music, it reflects an aura just like a Rubix Wheel. Similar to the Rubix Cube, the songs are deep and not always easy to understand. Good songs take more than one listen to get the full effect.

How did you get started with all this?
We started the band in 2007 as a power trio. We released our first CD that Spring and played a benefit show to celebrate it. We didn't waste time getting to the studio. I had some songs written and we worked them out with practice before we hit the studio. After that, we got so many gigs and festivals our mypsace plays started soaring.

What's the message to transmit with your music?
Our music tranmits the energy of feel good jamband music. The theme is escapism.

What's your method at the time of writing a song?
When I write the songs I use my current circumstances to emulate fictional scenes which reflect that intensity of real life situations.

Who are your music influences?
We're influence heavily by classic rock music and the jamband scene. I could sit here name a bunch of these artists, but I wouldn't want to be compared to them. We stay true to ourselves and develop innovative style.

What plans do you guys have for the future?
We plan on making the next CD. We have shows booked and we will do some touring in the future. We plan on playing festivals and shows throughout the year, gaining momentum and heading out to tour more venues every year.

What has been the greatest day as a musician?
The day I played an outdoor patio show with my trio was the greatest day ever. The sweat dripped off my Les Paul while we played a four hour show in the summer sunset.

What has been the funniest prank you guys have been or took part of while on tour or after a show?
No pranks.

If you guys were stranded in the middle of nowhere after a show or while on tour, and the help is 65 miles away from where you guys are, who would you guys send to look for help? And if while the rest wait, there's no food and the only way to feed yourself is by eating each other, who would you eat first?
I would send Nick for help. I wouldn't eat any of my band members.

What are your hobbies?
Swimming with sharks, biking, kayaking, hiking, skiing, and playing music.

What country would you guys love to play?
Spain.

With what bands would you guys love to share the stage?
Phish and touring jambands.

Are you guys happy with the direction the band is going?
Yeah. We played a nice festival to cap off the summer and made some videos too. We're gearing up to do our next CD and book some shows for Spring 2011.