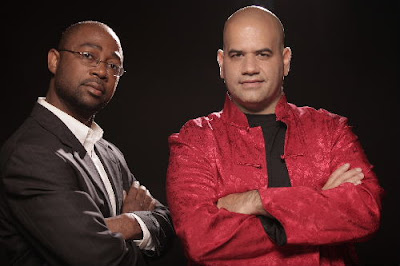 What's the meaning behind the band's name?
SaltmanKnowles comes from Mark Saltman and William Knowles. We write all of the material. We used to be known as SoulService because we felt that music was a service for your soul, but too many folks assumed we were an R&B band- which causes problems when you are booking gigs.

How the band started??
William and Mark met while studying compositions at the university of Massachusetts, Amherst. We started playing together and did a small recording. We loved hearing our tunes, and wanted more. Both of us decided early on that we believed in writing with as strong a melodic content as we could- something that we felt was missing in a lot of music that we were hearing.

What's the message you guys want to transmit with your music??
Well each song might mean something different. But basically its all about trying to feel good, or better in some cases, like a catharsis. A lot of emotion goes into it, so we are hoping folks can really feel some of what we are feeling about it. We try and combine our experiences and often use a lot of cultural inflections. Living in DC, its such a melting pot of culture, you get to experience a tiny bit of just about every culture in the entire world.
What's your method at the time of writing a song??
Both of us sort of write separately and play our semi-finished or finished ideas for each other- from there we try to get a group of tunes that we both dig and that work well together; Tempo wise, feel, and harmonically. Then we might decide on what instruments we’ll try and get when we record so that we can make a more specific arrangement of what we want. Since we’ve got Jimmy Junebug Jackson, our drummer, who played for a long time with organist Jimmy Smith, we try and get him involved in coming up with a groove that works; Hes got some great ideas.

Who are your music influences??
Both of us Love LOVE LOVE guys like Billy Strayhorn, Horace Silver, John Coltrane, Sting, Steely Dan and singers like Diann Reeves and Dee Dee Bridgewater.
Mark also studied with Yusef Lateef, who is really one of the most brilliant people, and William is a student of great pianist Stanley Cowell.

What plans do you guys have for the future??
We are still working on trying to get an extended tour together, and are trying to figure out if its worth making any more Cds, since everything just seems to be digital now.

Which has been the funniest prank you guys have been or took part while on tour or after a show??
Well, one time, when I (mark), was doing musical theater; I was turning pages in my score, only to discover that someone had put pictures from playboy in some of my pages.
That can be very distracting.

If you guys were stranded in the middle of nowhere after a show or while on tour. The help is 65 miles away from where you guys are, ¿Who would you guys send to look for help? And if while the rest wait, there's no food and the only way to feed yourself is by eating each other, ¿Who would you eat first?
Wow- now this requires some thought. I’d have to say that we’d have to eat Jimmy first because he has the most meat on him, but Marks not that far behind, so maybe him second. Lori Williams (our vocalist) and William wouldn’t make as good of a meal. But Jimmy Junebug is so entertaining, he’d probably be telling jokes as he was gulped down; either that or he’d be trying to eat us first.
Which country would you guys love to play?
Always dreamed of playing Europe and then the Middle East- maybe Japan too. It seems like non-american audiences have a greater appreciation for Jazz- wish it wasn’t the case.
With which bands you guys would love to share stage??
Roy Haynes, James Moody, Dee Dee, Diann Reeves, Sting- sort of the roll call of who we consider great.
Are you guys OK, with the direction the band is going actually?
I think we would really love to move up to the next level, but musically we feel like we are evolving in the right ways. We are not super on the business end of things, but artistically we always try to be at our best.
Check out more: http://www.saltmanknowles.com/
Publicado por Vents en 11:29