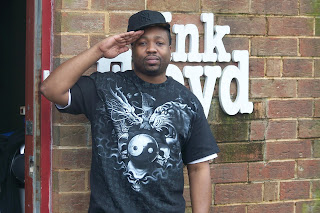 What's the meaning behind the band's name?
D.R.Universal is an acronym that is not short for doctor. It has over 50 different combinations such as: Dark & Raw, Damaging Radios & Deeply Rooted, just to name a few. Universal is also an acronym meaning: Uniting Nations In Verses Explaining Religion Sex And Lies.

How did you get started with all this??
I started as part of a group back in Buffalo, NY in the late 90s. After the group broke up and I moved to Charlotte, I started my solo career about 5 years ago.

What's the message to transmit with your music??
Positivity, fun and thought provoking, plain and simple.

What's your method at the time of writing a song??
It depends really, sometimes I hear the beat in a session then know exactly what I want to do with it when I get home. Then other times I just play beats and let it hit while I'm trying to write. I would say more often than not I usually sit down and create a song to a beat that I have chosen for a reason.

What plans do you guys have for the future??
In the short term, I just completed my second album which will be out in late November.Then I plan to tour the southeast on a promotional tour after the new year. Long term goal is just to live of making the type of music that I want to make. I don't want to have to conform to the point where I have lost myself in the music. I always want to give as much of me as possible to my listeners. If I can build a steady following that will allow me to travel across the U.S. and even Europe, then I would be very content with that. I'm not talking about mainstream sales either.

What has been the greatest day in the band?
So far my greatest day was at the 2008 Queen City Music Awards which is the biggest awards show in in NC and SC. I won the award for the Most Improved Artist and performed that night as well. The event as filled with local celebrities and anyone involved in entertainment in the Carolinas.

What has been the funniest prank you guys have been or took part while on tour or after a show??
When I was with the group back in Buffalo we went on a semi-tour across New York State. We stopped at a coffee shop in Ithaca after a radio appearance and and one of my group members said something bad about the university on the air. During the next segment the 3 of us were encouraged the students to call to the station and yell at our other member. He was so mad at us for that, but the dj loved it, he thought it was funny too!

What are your hobbies?
Promoting my music online..LOL. Besides that I like to watch football and basketball on tv. And UFC if I can catch it. But really I'm too busy for much else, no such thing as "free" time when you're and indie artist on the grind. (IMO)

What country you guys would love to play?
AMSTERDAM! Nuff said

With what bands you guys would love to share stage??
The Roots! No Question!

Are you guys OK, with the direction you're going so far?
Yes I am very pleased with the path that I am on right now. Sometimes it does get frustrating when things don't progress as quickly as we would want them to sometimes but its the passion for my craft that keeps me working harder each day!