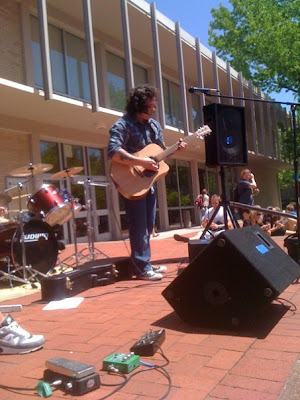 How did you get started with all this?

I got started with my solo acoustic project this past year because I had been singing with a full rock band for a while but I started writing some very intimate and personal songs and taking a more poetic and emotional approach to my music, but it was not very well received by the band.  I began to feel that starting a new project that gave me the artistic freedom I needed was necessary.
What's the message to transmit with your music?

The message I'm trying to transmit through my music is that it's okay to write poetic and unconventional songs and explore some new themes that break out of the mold of the popular radio format.  I believe that every artist should be allowed to create his or her own vision, but it's an artist's responsibility to experiment and search for new ways of expressing that vision, because in my opinion a copy of a copy of a copy of a song, does not make it "new" or "original".  If my music never makes it on to mainstream radio, I can live with that.  At least that way every person that has come to, or will come to a show, will receive an intimate and unforgettable performance that can't be manufactured or transferred through controlled airwaves.
What's your method at time of writing a song?

Most times when I'm writing a song, a lyric will come to me randomly while I'm doing some mundane activity at work, or climbing a flight of stairs, and I'll have to stop what I'm doing (including telling my boss to wait a sec, fortunately he's very understanding of the creative process) and get out my phone and text myself the lyric or song idea.

Who are your music influences?

My musical influences are the band Brand New, the band Manchester Orchestra, the side project of Andy Hull (Manchester Orchestra’s founder and singer) called Right Away, Great Captain!, and there is a hint of Ingrid Michaelson in some of my songwriting in that she isn’t afraid to be herself and use some interesting riffs and melodies.
What plans do you have for the future?
My plan for the future is to send out my demo very soon to a few record labels in hopes of a bite.  If my 1 in a million chance doesn’t happen for me right away, I won’t be too upset because I’ll keep creating music that I enjoy and through hard work I’ll make my own luck (much like this “lucky” interview, thanks again Raf).
What has been the greatest day in your music career?
My greatest day as a musician was the first day that I knew that I could pull this “solo” thing off.  The incredibly talented folk musician, John Craigie, out of California, was touring through my town and was playing at a venue nearby.  I needed a place to showcase some local poetry so I called up another buddy that was organizing this show and he let me and some talented friends open with some poetry.  Then, they needed some more time filled at the last second, so I went on and played some of my acoustic stuff I had been working on.  It was a very “out of my comfort zone” experience and I felt very naked playing my songs by myself, but it was very warmly received by the people there, and John Craigie himself.  I actually get to open for him again in November which I’m very excited for.
What has been the funniest prank you have been or took part while a show or tour?
As far as pranks go, I’m afraid that I don’t really feel that I’m at the point in my career where I feel comfortable pranking other musicians.  I’m still trying to earn respect and be known as the professional and “on time” guy.
If you were stranded in the middle of nowhere after a show or while on tour, and the help is 65 miles away from where you are, who would you send to look for help? And if while the rest wait, there's no food and the only way to feed yourself is by eating each other, who would you eat first?
I could probably make the 65 mile trek for help in a few days, but as for eating myself, since I am a solo project, I would definitely start with some unimportant and non-weight bearing toes, since I would like to keep all my fingers to continue playing guitar and piano.  And with the right shoes, no one will ever have to know that I ate myself.
What are your hobbies?
My hobbies are writing music and poetry.  I got into poetry in order to write better lyrics, but I stumbled upon the fact that I’m actually pretty good at it.  I’m in the finishing stages of writing and compiling my first full length book of poems about the Iraq war (I’m a decorated Iraqi Freedom Veteran and was awarded a Navy Achievement Medal with a V for Valor for multiple acts of bravery while under enemy fire).  One of my poems is currently a finalist for Best War Poem of 2010 by Winningwriters.com.
What country would you love to play?
The country I would love to play in most is Ireland. I have been all over the world because of my military service, but never Europe and in my mind, Ireland has this unique mysteriousness about it and a very rich history that I would love to explore.  Plus, playing in an Irish pub should be every small-time musician’s dream.
With what band would you love to share stage with?
It is my dream to someday share the stage with Manchester Orchestra.  Everything they have achieved has been through the Do It Yourself process and all without heavy radio play.  I’ve been to two of their live shows in the past year, and they play with such emotion that it changes the way you play and write music.
Are you Ok with the direction you are moving so far?
I’m very happy with the direction this solo project is going.  I’ve had a lot of good feedback and response, more than I already thought I would have at this point.  It was just a few months ago that I would wait for the wife and son to go to bed so I could stay up late and self-record my demo, and now I’m doing a cool interview for Vents Magazine.