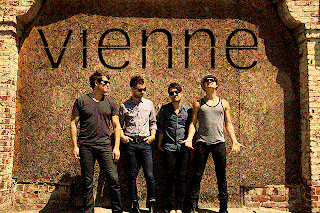 What's the meaning behind the band's name?
Named after significant decisions made at the Council of Vienne in 1312. Some old ways were traded in for new ways, and it carries meaning for us as a band as we would like to do the same. Plus it looks and sounds good.

How did the band start?
I (Jonathan) was doing the solo artist thing under the name "Vienne" for a year or so along with my good friend and producer Chris Franz. Our friend Kameron, who is from Atlanta, GA and was living there at the time, called me and said he wanted to play drums for me in my band. I tried to tell him it wasn't a band but he pretty much convinced me it needed to be. So Chris, Kameron and I started rehearsing together in need of a bass player. We desperately wanted our friend Wayne Miller to join us, but he was in another band and seemed out of our reach. We set up a meeting with him anyways and the next week made it official and started writing together.

What's the message to transmit with your music?
We want to provoke curiosity within the listener. We want to provide space and sound to accompany the journeyman/woman in exploring beauty. And we just want to be storytellers.

What's your method at the time of writting a song?
We search for whatever moves us. It's all in the feeling, whether in the music or in the lyrics. It always starts with an idea that is brought and explored because each of us shares in the hunt for soul.

What plans do you guys have for the future?
We are in the middle of writing and demo'ing a new record that will be out in 2011. We want to push ourselves into new territory as musicians and songwriters, and we trust that people will respond to that.

What has been the funniest prank you guys have been or took part of while on tour or after a show?
We keep the atmosphere pretty light. There's always a running joke that's in action, no extremely notable pranks. But we do sing some karaoke from time to time. Our YouTube videos give you a glimpse of what I'm referencing.

If you guys were stranded in the middle of nowhere after a show or while on tour, and the help is 65 miles away from where you guys are, who would you guys send to look for help? And if while the rest wait, there's no food and the only way to feed yourself is by eating each other, who would you eat first?
We would obviously send Kameron for help cause he's a vegetarian and would probably just eat the grass along the way... or Wayne cause he's the new guy.
And we would eat Chris first because he would provide the most sustenance.. He's the biggest and his biceps are like porterhouse steaks.

Which country would you guys love to play?
France, Japan, Italy, Australia and Argentina.

With which bands would you guys love to share the stage?
Aqualung, Phoenix, Athlete, Kings of Leon, MuteMath, Miley Cyrus.