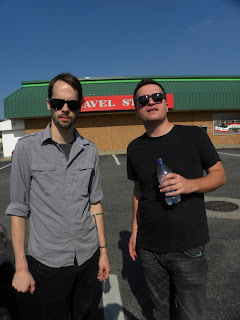 What's the meaning behind the band's name?
Well Spiro Agnew was at first kind of a hold over from when I used to make a bunch of shrill noise with some friends in college. We used to get together and abuse the hell out of instruments for shits and giggles and one of the names we referred to ourselves as was Spiro Agnew. Those gatherings were never much more the messing around but I held on to the name, resurrecting it for this project. As I wrote the album I began to realize how relevant the name was becoming as the songs really seemed steeped in political concepts.

How did the band started??
For most of 2009 I was spearheading a noise-punk band called vitiligo. We struggled with repeated line-up changes, strong egos, and admittedly (with reluctant hindsight) probably a mediocre sound. Towards the tail end of the band I began conceptualizing noise-infused electronic music and when that band met its end I turned my full attention to the new project, Spiro Agnew. After writing and recording several songs I was able to recruit one of the former vitiligo members, Zach Reitman, to join me for most of the live performances.

What's the message to transmit with your music??
I don't generally write towards a specific theme. A lot of the time it doesn't occur to me what a song is about until after it's recorded. I like dealing with ambiguities and I tend to work out my anxieties in my writing. For this particular album a lot of those anxieties seemed to focus around our alarmingly divisive political climate.

What's your method at the time of writing a song??
Generally, I find myself lying on my back in my living room drinking beer and plucking my guitar till an idea comes. It's certainly the least flattering image you could conjure, especially considering I'll usually lie there in my underwear, but it seems to work.

Who are your music influences??
I'd like to think I take influence from a wide variety of music; gathering beats, melody and lyrical ideas from a lot of different styles. That could just be bullshit pretension to say that but there might be some truth in it. I was listening to a lot of Handsome Furs while working on this album, maybe that had an effect.

What plans do you guys have for the future??
It certainly couldn't hurt to get signed, or at the very minimum someone to handle the administrative end. My kingdom for a PR department. Otherwise, we're focused on gigging regularly, playing out of town when we can and hopefully finding more people who like our music.

Which has been the greatest day in the band?
One time we got drunk in a park... That was fun.

Which has been the funniest prank you guys have been or took part while on tour or after a show??
The guitarist and I of vitiligo used to have an ongoing joke, that we often shared with the audience, that the bassist had raped the drummer. Nobody ever really thought that was funny. We seemed to have a fairly awful sense of humor.

If you guys were stranded in the middle of nowhere after a show or while on tour. The help is 65 miles away from where you guys are, ¿Who would you guys send to look for help? And if while the rest wait, there's no food and the only way to feed yourself is by eating each other, ¿Who would you eat first?
Surely I would be the one sent for help, it's my lot in life to do so. Considering that would leave Zach behind I'd come back and eat his corpse... or maybe just pee on it.

What are your hobbies?
I've been fixing an old motorcycle for several years. Just got back from a trip to the East Coast, where it lives, where it finally got to the point where it may be drive-able.

Which country you guys would love to play?
Probably Spain or England.

With which bands you guys would love to share stage??
I'd have killed to play with The Clash or Joy Division. For now it'd be great to open for !!!, Low or maybe And You Will Know Us By The Trail of Dead.

Are you guys OK, with the direction the band is going actually?
Yeah. If it continues like this maybe, just maybe, someone will sign our asses.
Check out more: http://www.myspace.com/spiroagnewsings
Publicado por Vents en 11:42